The Narmer palette contains many predynastic reminiscences but also includes writing and a great change in terms of Egyptian art. Here appears fully developed the representative system of the human body to which the Egyptians will be true throughout their history: heads and legs are in profile while torsos are represented in front view except in female portrayals in which -as we shall see- the breasts are drawn in profile.

One of the most important artworks of the first two dynasties which form the so-called Archaic period is the great Stele of Pharaoh Uto the King Snake. His hieroglyph name –Snake– is placed on the Palace’s facade which also has two doors and three towers. This entire scene appears nestled under Horus-the-hawk, the patronymic god of Upper Egypt, which was thought to be embodied in the members of the royalty.

The tomb of Menes and other pharaohs of the first two dynasties were built underground and were entirely different from the ones of the last monarchs of the third and subsequent dynasties which were buried in high hypogea. The underground tomb is for the worshipers of Osiris -Lord of the Dead- the popular and beloved god at the beginning of pharaonic Egypt.

But with the Third Dynasty a great change took place in Egypt and this is reflected in the way royalty was buried. This big change is the reason why historians place here the beginning of the first of the great periods of Pharaonic Egypt: the so-called Old Kingdom (2680-2258 BCE). It must have been a religious reform that did not transcend the common people –always devotees of Osiris– but that was imposed upon the great judges, high officials, and especially, members of the royal family. Without entirely ignore Osiris these upper classes were devoted –with a fervor that led them to develop great constructions– to another religious concept, or rather, to other philosophical system: that of Ra, the Sun god. Around 3,000 BCE. a pharaoh named Zoser of the Third Dynasty was profoundly interested in the concept of Ra and imposed it to members of his family and court. Since then, the tomb was no longer an underground precinct but an outdoor construction: the pharaohs were buried in pyramids* because those inclined walls were the symbol of the world dominated by the vertex or apex where Ra was supposed to be sailing in his solar ship. Therefore from Zoser, and in subsequent dynasties, Egyptian funerary monuments were of two types: common graves built for high officials which have been called mastabas*, and the royal tombs whose main element is the pyramid. The “stepped” pyramid of Zoser in Sakkarah is staggered. It suggests a gigantic mastaba on top of which a smaller one was built, and above it another was built, and then another, and another …, until seven of them were completed. So this first “experiment” to build a pyramid  appeared as a consequence of multiplication and superposition of the mastaba form built atop one another. This first attempt of pyramid was later abandoned and finally evolved in the form of the classic Egyptian pyramid which we are all familiar these days with. The author of this first model of a pyramid was probably the vizier Imhotep, architect and physician of the pharaoh Zoser founder of the Third Dynasty.

Cenotaph: An empty tomb or a monument erected in honor of a person or group of people whose remains are elsewhere. It can also be the initial tomb for a person who has since been re-interred elsewhere. Although the vast majority of cenotaphs honor individuals, many noted cenotaphs are instead dedicated to the memories of groups of individuals, such as the lost soldiers of a country or of an empire.

Mastaba: (alson known as pr-djt, transl. from Ancient Egyptian hieroglyphs meaning “house for eternity” or “eternal house”). A type of ancient Egyptian tomb in the form of a flat-roofed, rectangular structure with inward sloping sides, constructed out of mud-bricks (from the Nile River). These edifices marked the burial sites of many eminent Egyptians during Egypt’s Early Dynastic Period and Old Kingdom. Egyptologists call these tombs mastaba, which is the Arabic word for “stone bench”. 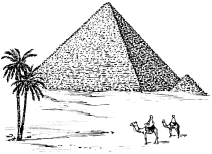 Pyramid: (from Greek pyramis). A structure whose outer surfaces are triangular and converge to a single point at the top, making the shape roughly a pyramid in the geometric sense. The base of a pyramid can be trilateral, quadrilateral, or any polygon shape. The square pyramid, with square base and four triangular outer surfaces, is a common version. A pyramid’s design, with the majority of the weight closer to the ground, allowed early civilizations to create stable monumental structures. Pyramids have been built by civilizations in many parts of the world. The largest pyramid by volume is the Great Pyramid of Cholula, in the Mexican state of Puebla. The Great Pyramid of Khufu, in Egypt, is the only one of the Seven Wonders of the Ancient World still remaining.