The Greek geographer Pausanias considered the schools of sculpture of Athens and Aegina as widely known: the first, of clear Ionian influence, was specialized in marble works and the second, of Doric influence, specialized in bronze casting works. The technique of Greek statuary evolved from the seventh century BCE thanks to the decoration of the temples’ pediments. The ancient writers claimed that the first who had the idea to decorate these pediments with sculptures were the Corinthians. The Greek sculpture also evolved by the need to decorate with reliefs the metopes of Doric temples. At last, the sculptural decoration of temples made possible the evolution towards classical Greek marble sculpture.

Athens started a school of sculptors/decorators mainly focused in the carving of tombstones or funerary steles. It is precisely in these steles where the classic types of sculpture began to form. They usually represented common scenes taken from ordinary daily life which tended to portrait the deceased in one of the crucial points of his/her life. For example, the Stele of Aristion probably represents one of the Athenian lancers who fought against the Persian army. Another particularly famous stele has been interpreted as representing the hoplite (a light infantry soldier) who dies exhausted after running the long distance between Marathon to Athens in order to deliver, as soon as possible, news of the great victory of the Marathon Battle. It is a masterpiece of the end of the Archaic period.

A less archaic style is seen in a relief representing the myth of the child Triptolemus. The brave young man has descended into hell to find the seed of wheat essential to humans.  Demeter and Persephone, the two goddesses of underground chasms, greet him. Demeter takes the wheat seeds brought by Triptolemus, while Persephone crowns his head. Certain parts of this relief must have been colored. The child is carved with great artistry and the whole anatomy of the figure has been admirably drawn in flat relief. The fine folds of the goddesses’ dresses resemble the clothes of the images of the girls that will be later represented in the frieze of the Parthenon.

A masterpiece of archaic sculpture is the Ludovisi throne. It is a block of marble with reliefs on three of its sides and opened at the front to form a seat. The birth of Aphrodite is represented on the back, in the moment when she was emerging from the sea waves while two nymphs on the stony shore welcome her with their arms. Two symmetrical reliefs represent at each side what we might call the sacred and profane love: in one the wife, veiled, is either offering incense or watching closely to keep the fire burning on a lamp, in the other there is a naked flutist playing her instrument with legs crossed. Another work worthy of mention are the statues from the sixth century BCE, famous in ancient times, representing both tyrannicides Harmodius and Aristogeiton sculpted by Antenor, a sculpture that stood in the Agora of Athens.

While the production of monuments, mainly lead by the school of Athens, promoted the evolution of marble sculpture during the early fifth century BCE, in the Doric cities of Argos and Sicyon the figures of nude young athletic types were produced in bronze. These bronze Athletes were built with simple lines and had well marked anatomical features, while the girls were represented almost cylindrical and wrapped in their robe clothing with their folded little peplum. These more simple type of female figures were easier to cast in bronze comparing to the curly-haired Ionic Korai made of marble. Marvelous examples of bronze statues are those of Poseidon (National Museum of Athens) and a young coachman or charioteer found at Delphi which was part of a bigger bronze group representing a whole chariot with horses (Museum of Delphi). 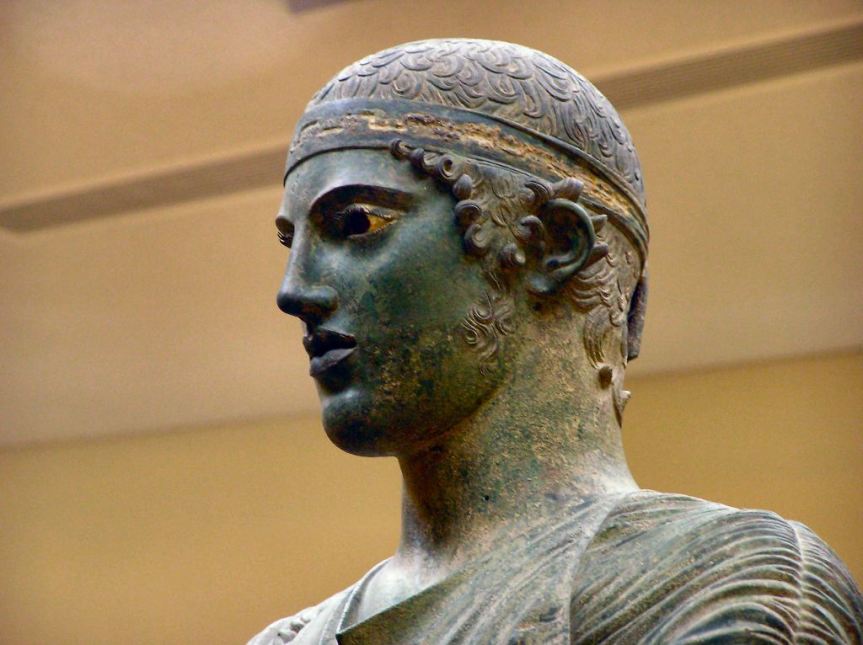