The term “Romanesque Art” designates all  the artistic production of the Western European countries between XIth and XIIth centuries, after overcoming both the period of the barbarian invasions and the subsequent Carolingian period, which was the immediate artistic period prior to the Romanesque. During the Romanesque, construction techniques significantly improved and there was a new interest in the ancient classical decor. The term “Romanesque” alludes to the great influence the art of ancient Rome had on these new Western art schools. “Romanesque” is a recent and arbitrary designation, which originated during the XIXth century from the interest philologists had in understanding the phenomenon of the formation of the Neo-Latin languages. In the same way that “Romance languages” were those vernacular languages derived from Latin and formed in Western Europe, so too the artistic forms of this period of the Middle Ages (in which Rome’s memories were still alive) are called “Romanesque Art”. It is curious to note that when the Romance languages originated they did it so not by the corruption or the evolution of scholastic Latin, but from the vulgar Latin. In the case of Romanesque art, a similar process took place: the artistic forms did not renewed on the basis of the techniques and styles of the art of Imperial Rome, but on the artistic forms used in the Roman provinces and that were sometimes different from those used in the capital. An important element in the origins of Romanesque art was the strong artistic influence of the Carolingian period, whose influence is quite apparent in several early Romanesque buildings.

The extent of Romanesque art was the same as the extent of the Western Roman Empire: Italy (though still subject to Byzantine influences), Gaul (especially Provence, with the Hispania and Spanish regions), and finally Germany and part of the Britannia (although the latter was greatly influenced by Celtic art).

Before the year 1000, the Western European nations were dominated by Germanic ideologies. Cronologically, the Romanesque period began around the year 1000 until the expansion of the Ogival or Gothic French art which was later adopted throughout Europe in the early XIIIth century. Perhaps because the monastic life developed with more intellectual maturity in the West, after the year 1000 there was a great constructive impulse, and so in a short time, Italy and ancient Gaul, together with the Rhenish provinces (or areas of Western Germany along the Middle and Lower Rhine), were all covered with new monuments. It is a feature of the Romanesque architecture the great importance given to vaults, certainly by the desire to prevent fires and provide buildings with a more solid structure. The ancient Roman buildings that covered the provinces of the Empire provided Romanesque architects with many of the techniques of the ancient Roman construction. The stone vaults were heavily imitated. The most commonly used types of vaults were the semicircular or rounded arch or the barrel vault, although these vaults often had some reinforcement arches called transverse or reinforcing arches* which formed the “ribs” of the great stone cylinder -the vault itself- that covered buildings. These ribs, or reinforcing arches were characteristic of the Roman construction.

Romanesque architects also used the groin vault and domes. When a church had three naves, sometimes the main nave was covered with a barrel vault, while the two lateral naves were covered with groin vaults or with quarter circle vaults, which counteracted their thrust. The dome was built on top of the crossing*, that is at the intersection of the longitudinal nave and the transversal nave or transept, thus forming a cross. The difference with the Roman architecture lied in that in order to cover the area occupied by the intersection between the transept and the longitudinal nave, Roman architects usually used the groin vault, while Romanesque architects chose a dome; sometimes they also used a rough stone dome that could be stilted* and which externally appeared like a tower or cupola* placed at the center of the church. Only exceptionally, some Romanesque domes in France and Spain exhibited a spherical or octagonal shape.

Most known Romanesque buildings are churches. These churches had a fairly fixed floor plan reminiscent of the ancient basilicas with three longitudinal naves and only one transept. Sometimes the longitudinal naves ran past the crossing and behind the apse, forming the ambulatory where some smaller chapels were located. The ambulatory was more common in the churches built by the monks of Cluny during the last times of the Romanesque period, although it appeared less frequently in earlier buildings.

Since Romanesque builders did not follow exactly the proportions established for the construction of the old classical orders, this gave them great creative freedom because they did not have to stuck to certain measures when projecting columns and pillars, and thus their churches arose without limits in height but only those required for the stability of the building itself. The columns commonly used where cylindrical. Romanesque capitals  were decorated with a vast variety of forms. The simplest type was the stone cube (see figure below extreme left), slightly rounded at the bottom to join the circular section of the column’s shaft. But commonly, these capitals were decorated with leaves (below center) in a new interpretation of the acanthus leaves of the classic Corinthian capital, or were also decorated with interlaced (below far right) as a reminiscence of the geometric themes of Irish Pre-Romanesque art and its subsequent diffusion during the Carolingian period. In other regions, these capitals reflected a clear Muslim influence. Other favorite themes used by decorators of Romanesque capitals were figures of stylized animals (alone at the center-the historiated capital): lions, turkeys, griffins, all influenced by the study of fabrics, ivory and weapons imported from the East, particularly Sassanid. The decoration of Romanesque capitals included depictions of the Old and New Testaments, episodes from the work at farms, scenes from the arts and industries, and a myriad of other themes that constitute a real plastic encyclopedia of medieval life. 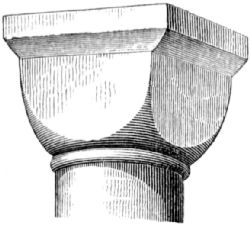 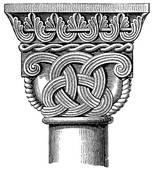 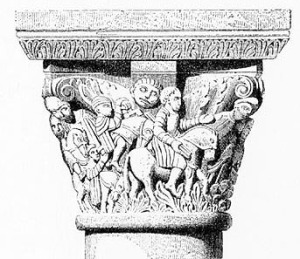 The base of the column (left) used to be a simple imitation of the classic attic base, but was very common the presence of sculpted figures (such as small leaves or stylized animals) in the angles between the circular moldings and the squared plinth. This ornamental resource to join the circular area of the basal section of the column’s shaft with the square of the base was already used in classical antiquity in the forum of Pompeii.

Architraves were generally absent in Romanesque buildings. Above the capital or at the beginning of the vault usually ran a simple molding, sometimes decorated with figures and plant reliefs. Outside the church, the walls were decorated with simple moldings* forming long strips; often, at the top of the walls there were blind arches* supporting corbels* which topped the wall’s facade. Thus, there was a horizontal area with architectural ornamentation on which the first shingles of the roof rested. The vaults’ buttresses were mainly interior and formed pilasters that supported the reinforcing arches, but sometimes on the facade the vault’s ribs of the nave were reinforced with little developed buttresses. Many Romanesque churches were monastic, and as the monks entered the church by the church’s choir from the convent, this meant that the facades did not need vast decoration. This austere aspect of the first Romanesque churches contrasts with the importance that a church’s facade will later have in the Episcopal gothic cathedrals which were richly adorned with portals filled with many statues and reliefs. 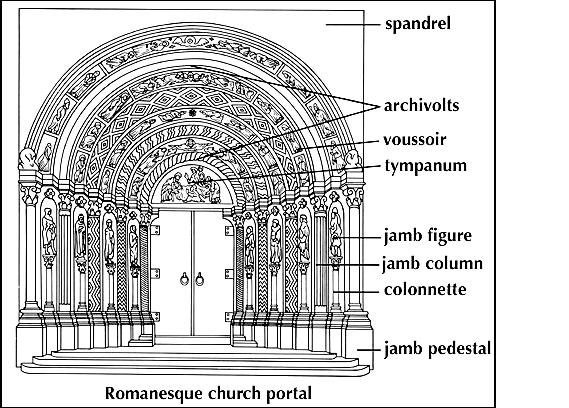 The interior illumination of a Romanesque church was achieved in different ways. Those with a higher central nave and two lower lateral naves were lit up like the ancient basilicas, that is, through windows opened on the free space of the wall located in the space marked by the difference in height between the central and the lateral naves; other churches received light only by the central tower of the crossing and by the rose window* of the facade. The orientation of many of these churches was like in the early Christian basilicas: from East to West. The cloister* used to be attached to the South wall, to prevent that in winter this fell under the shadow cast by the church itself. 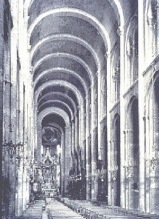 *Transverse or reinforcing arches: Supporting arches which run across the vault from side to side, thus dividing the bays.

*Crossing: In a church, it represents the junction of the four arms of a cruciform (cross-shaped) church. In churches of Romanesque and Gothic styles, the crossing gives access to the nave on the west, the transept arms on the north and south, and the choir on the east. 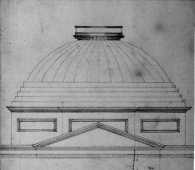 *Stilted Dome: A dome resting over a structure which makes it standing at a higher height. 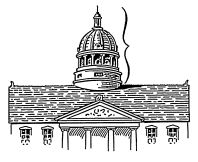 *Cupola: Usually a small, dome-like structure resting on top of a building and often used to provide a lookout or to admit light and air inside a building.  Cupolas usually crown a larger roof or dome.

*Molding: A strip of material with various styles and forms used to cover transitions between surfaces or for decoration.

*Blind arches: An arch placed directly on the wall of a building which has been infilled with solid construction so it cannot serve as a passageway, door, or window.

*Corbels: A corbel is a solid piece of material protruding from a wall to carry a superincumbent weight, a type of bracket. 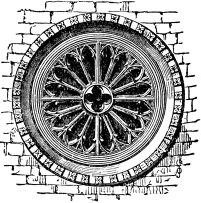 *Rose window: A circular window, especially those found in churches of Romanesque and Gothic architectural style, which is divided into segments by stone mullions and tracery, and often glazed with stained glass. 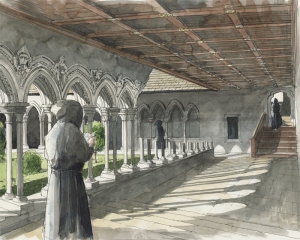 *Cloister: A covered walk, open gallery, or open arcade running along the walls of buildings and forming a quadrangle. The attachment of a cloister to a cathedral or church was commonly against a southern flank and is usually an indication that it once was part of a monastic foundation.