The schools of decorative painting formed alongside the development of the French Romanesque schools of architecture and sculpture. The best preserved decorative works of the French Romanesque are the frescoes of the Saint-Savin’s church, near Vienne, in Dauphine. One of them represents the “Supreme Maker” while creating the sun and moon as He was drawn with a fine silhouette and delicate gesture. The color tones are also subtle: dull reds and grayish yellows, with some green and no dark areas. In the apse of this same church is the traditional seated figure of the Almighty in the act of blessing, also of unsurpassed beauty. The painters of Saint-Savin appear to have been part of a school that reached a considerable geographical extension as there are similar frescoes in a number of other Romanesque churches in several French cities.

However, the same difficulty in dating French Romanesque architectural or sculptural works is found when dating French Romanesque paintings. The chronology of these works of art can’t be specified; neither the origin and gradual evolution of French Romanesque painting can be fully explained. Currently it is believed that its evolution was greatly influenced by the works of the Order of Cluny, as the monks of Cluny decorated their monuments with numerous sculptures, these sometimes polychrome, and eventually also decorated the empty wall’s surfaces with frescoes. The great mother church of Cluny had a fresco in its apse with the essential image of the Almighty. Furthermore, in the monastery of Cluny there was a painted oratory with scenes from the life of Jesus. All these, of course, disappeared with the destruction of Cluny, but there is an entirely painted church in Berzé-la-Ville, which was a priory of Cluny, and in its frescoes is really noticeable the style and color range of others French Romanesque wall paintings.

Prior to the study of these wall painted decorations it was frequently said that the more properly French medieval painting was the “painting on glass” used to decorate windows and, indeed, during the Romanesque period, painters devoted with fierce passion to decorate stained glass* windows. It is very likely that in the Carolingian period there were works of stained glass using different colors, forming a kind of translucent mosaic as it was described in a description of the old cathedral of Reims, built by Hincmar in the ninth century. No one knows the exact date when lead begun to be used to join the different colored glass pieces, as the first stained glasses were apparently made on a wooden frame. There is evidence that in the X century these wooden frames were still in use because in a window that was later boarded up in the church of Château-Landon a colored stained glass of this type was found and neither the church nor the window are dated after the Xth century. But at the beginning of the Xth century, a historical document from Fleury states that, after part of the church was burned, the monks feared that with the heat, the lead on the windows melted down. In the Romanesque period, stained glass windows were not made by painting ornaments and figures on glass but by cutting pieces of different colored glass and then forming a sort of a translucent mosaic.  These different colored pieces were assembled together using lead, which being opaque, helped to accentuate the drawings’ lines. Although for each color was needed a different piece of glass, this procedure had the advantage that the final result wasn’t a piece of glass with darker and cloudy colors as are the stained glasses of today which removes transparency to the windows. The oldest stained glasses preserved in France are those of the churches of Saint-Remy of Reims, followed by those of Saint-Denis from the mid-twelfth century and those of the cathedrals of Sens, Chartres, Angers , Poitiers and Le Mans. 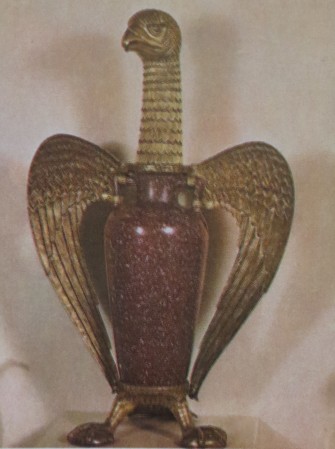 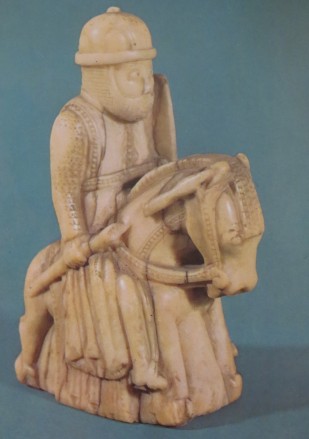 Above left: Egyptian porphyry vessel that once belonged to the treasure of the Cathedral of Saint Denis and which was later turned into an eagle (Louvre).  Above right: A French ivory chess piece from the twelfth century (National Museum of Bargello, Florence).

During the Romanesque goldsmith was very important in France. It is essential to mention the treasure of Saint-Denis from mid-twelfth century. A magnificent jug of Egyptian porphyry in form of an eagle is the clearest example of the great skill of the jewelers employed by Suger, the architect in charge of Saint-Denis. Another gem of Saint-Denis from the same time, today lost but reconstructed thanks to detailed existing descriptions, was the pedestal embossed with precious metals that the abbot ordered with the purpose of holding a Merovingian cross attributed to St. Eloy. We must also mention the cast bronze doors, commissioned to French artists, a type of artistic work without precedent in France.

But in the art of metalworking, the most characteristic of French Romanesque were the enamels from the region of Limoges which were traded extensively. At this time, many liturgical vestments and even altars of some value were glazed, because the artists of Limoges abandoned the costly and difficult technique of the Byzantine cloisonné enamels in which the vitrifying color occupied cells made in advance with gold plates. Instead of this Byzantine technique which forms kind of a “mosaic of enamels”, the artisans of Limoges applied the enamel in a thick layer on a previously leveled copper surface. These plates were covered with very thick vitreous pastes that, when almost melted inside the ovens did not become so fluid to avoid pouring out and in consequence led to a loss of form. This kind of enamels were called champlevé because they didn’t have the cloisons or small cell deposits as the Byzantine cloisonné enamels had and instead had the champs, or fields for the surlevés or raised colors. After the application of the enamel, these plates were skillfully joined together by the artists, who knew how to weld bronze without damaging the enamel, and by using several of these pieces they made boxes and reliquaries.

In France, the ivory carving continued  the old Carolingian tradition.  There are abundant plates used to decorate bindings of books in beautiful Romanesque style. Also of French origin are several hunting horns (olifants) covered with ornamental leaves and decorative figures, there are also some remarkable carved chess pieces.

Romanesque barons and bishops mainly used oriental fabrics. In the Cathedral of Bayeux it is kept one of the most important monuments of the art of embroidery precisely from the Romanesque. It’s the so called “Bayeux Tapestry” in which, according to tradition, Queen Matilda, wife of Duke William the Norman conqueror of England, embroidered episodes of his conquest. It is a very long embroidered fabric of great historical interest because it is contemporary of the events it describes (1066). With great detail and the help of Latin inscriptions, as in the modern comics, are told all the vicissitudes of the battle of Hastings in which England was taken by Normans.

As for the art of the miniature during the Romanesque, books (a subject of major interest during the Carolingian period) underwent a diminishing in value, or at least in France the art of the miniature regressed.  In England on the one hand, and on the other on the territories that were once part of the Carolingian Empire (like the Rhine and Lower Saxony), the use of the miniature was still very strong, particularly in their great monasteries. In Romanesque France the stained glass and the enameling vastly exceeded the art of the miniature, as the books of dialectic and polemics were not so prone to be illuminated as were gospels, psalters and sacramentaries. On the contrary, it was in the capitals of the column’s cloisters were the existing disputes between different French Romanesque artistic schools were reflected. Sculpture was the art that served to illustrate with reliefs the knowledge, ideology and philosophy of the Romanesque.

The Romanesque is considered a crepuscular dawn where whole forms were more appreciated than their particular details which won’t be precisely noticed until the peak of the Gothic period.

*Champlevé: An enameling technique in the decorative arts, or an object made by that process, in which troughs or cells are carved, etched, die struck, or cast into the surface of a metal object, and filled with vitreous enamel. The piece is then fired until the enamel fuses, and when cooled the surface of the object is polished. The uncarved portions of the original surface remain visible as a frame for the enamel designs; typically they are gilded in medieval work. The name comes from the French for “raised field”.

*Stained Glass: colored glass used to form decorative or pictorial designs, notably for church windows, both by painting and especially by setting contrasting pieces in a lead framework like a mosaic.