The spirit of what we call “Romanesque” art spread rapidly throughout Western Europe beginning in the mid-eleventh century.

In the particular case of Spain, a focal point for the dissemination of Romanesque art was Catalonia followed by the region of the Aragonese Pyrenees to finally reach Castile and León through Navarre and spreading from there to the northwest of the Iberian peninsula up to Galicia.

The implementation of the Romanesque style in León was favored by the entry of the new royal dynasty of Sancho “el Fuerte” of Navarra and later, during the reigns of King Ferdinand I and Queen Sancha and of their immediate successors, many of the artistic treasures from Oviedo were produced.  Such works of art included artifacts like the beautiful ivory crucifix of the National Archaeological Museum in Madrid and the “Ark of the relics”, as well as important architectural works like the temple dedicated to Saint John the Baptist at León (re-built in mid-XI century) and the Basilica of Saint Pelagius of Cordoba. 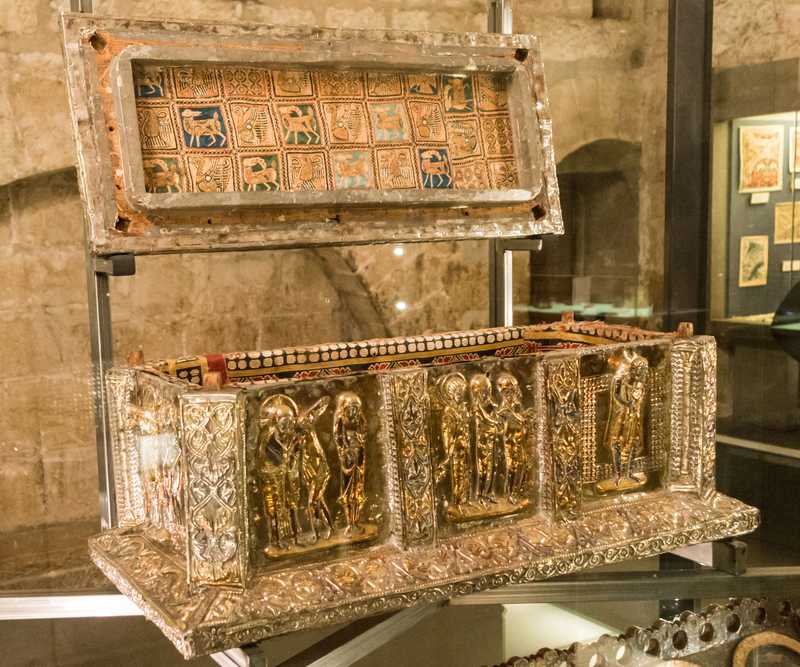 Ark of the Relics, XI century (Collegiate Church of San Isidoro of León).There are no doubts about the decisive role that the ancient pilgrimages to Galicia exerted in the expansion of Romanesque styles throughout Spain.  The cathedral of Santiago was born under these pilgrimages.  This cathedral was rebuilt several times during the Romanesque period and it is difficult to determine the artistic styles used in the churches built before the current building was consecrated.  It was built between 1075 and 1124 and it is clear that its design was influenced by French styles.  The last stone was laid in 1122 or 1124, but the closure of the west portal dates from 1128 and the cathedral was finally consecrated in 1211.

The floor plan of Santiago de Compostela is a Latin cross with three naves, its central semicircular chapel is followed by an ambulatory.  Its structure stands out for its slender proportions; the central nave is covered by barrel vaults and the lateral naves are so by groin vaults, but its novelty lays in its clerestory that runs over the central naves, and the ambulatory, surrounding the entire temple.

The churches influenced by the style imposed by the Basilica of Santiago abounded not only in the territory of León but also in Castile.  All these are massive buildings, often with profuse sculpted ornaments and lateral porticoes.  The crossing is covered by groin vaults or by domes usually hidden by an octagonal tower.  Only the old cathedral of Salamanca, the Collegiate of Toro, and the cathedral of Zamora have domes visible from the outside; in order to incorporate their structures within the crossing of the naves these domes are lined with turrets, which actually serve them as buttresses.

The Cathedral of Zamora is an exceptional case in the Spanish Romanesque.  It was begun in 1151 and completed in 1174, and built by a foreign master architect.  Its famous dome in the style of a lantern is held above the crossing by pendentives.  This architectural solution was already used in Byzantine architecture: above the pendentives rests the dome’s drum followed by a row of windows.  Such oriental style is translated to the dome’s exterior decoration, with its four turrets and its small and pointed pediments inserted between them; the bulbous domes that crowned these small turrets underline even more the oriental appearance of these domes.

An exceptional monument for its uniqueness is the great cloister annex to the church of San Juan de Duero in Soria (a temple which belonged to the Hospitaller Order of St. John) with its array of arcades along its sides, two of them with Moorish horseshoe arches suggesting a direct influence from artistic styles typical of the Middle East.  One of the most important monuments from the early Romanesque period in Aragon and Navarra are the monastery of Leyre, the main entrance of Santa María la Real de Sangüesa, the Romanesque remains of the cathedral of Pamplona, the circular church of Eunate, the Church of San Miguel de Estella, and the Collegiate Church of the same city (all of these in Navarra); and in Aragon are the Cathedral of Jaca, the imposing Castle of Loarre with its church, and the churches of San Juan de la Peña and San Pedro el Viejo in Huesca.

Moreover, the first religious buildings erected in Catalonia after the first conquering campaigns initiated by the Carolingian Empire in the late eighth century, differ in construction and decoration from those present in other regions of Spain.  In the following centuries, until around the year 1000, the influence of Carolingian art persisted in Catalonia, though altered by the striking infiltration of the Mozarabic art.

This mixture of the Carolingian tradition and the Mozarabic influence is visible in the great domed basilica of San Pedro de Roda, built along the north coast of Catalonia near Puerto de la Selva.  It is a building with three apses, with cruciform floor plan, and a major apse with a parabolic silhouette and ambulatory.  The temple was consecrated in 1022, and its high barrel vault built on transverse or ribbed arches is supported by four pairs of thick pillars standing on a high square base and flanked by two narrow lateral naves covered by quarter barrel vaults.  The main arch of the central apse is supported by two tall exempt columns.  The structure of this church is very beautiful in its regularity.  In upcoming essays we will refer to the main entrance of this church of San Pedro de Roda and its Romanesque decoration.