Finally, we will see how the kings of the house of Aragon introduced the Gothic style in southern Italy. When Martin I of Sicily, heir of the crown of Aragon was proclaimed king, once again Sicily shared its destiny with that of the Spanish territories until the middle of the XVIII century. During the reigns of Martin I of Sicily and Martin The Humane, Sicily admitted the influence of Catalan and Valencian architects, who we seen had already developed a peculiar variety of Gothic art entirely different from the French and Castilian Gothic. It was precisely those styles of Catalan and Valencian Gothic art that were introduced to Sicily in the XV century, and therefore it is not strange to find great similarities between Sicilian monuments and those of Catalonia, Mallorca and Valencia. Only the name of one Majorcan architect appeared in the royal records, that of Guillem Sagrera, the director from 1443 to 1457 of the works to reform the New Castle of Naples made in the time of Alfonso V, and whose masterpiece is the huge room covered by a ribbed vault very similar to the one that the same Sagrera had constructed a few years before for the chapel of the Holy Sacrament and of the Holy Christ of Lepanto in the cathedral of Barcelona.

Not only the building’s general lines but also the details of sculptures and moldings were imported from Catalonia and Valencia: architects would bring along with them workers and even materials already carved, such as the Catalan Gothic style capitals we see in a window, divided by two columns, in the archbishop’s palace in Palermo. The Marchesi Palace has a courtyard with a stairway over arches and open to the courtyard, a very common feature in Catalonia; the palace Ajutamicristo, built in 1490, resembles the Palau de la Generalitat de Catalunya in Barcelona.

The towers of the Marchesi and Abatellis palaces are crowned with barbicans and decorative battlements, such as those of the Lonjas de Palma and Valencia. In particular, the tower of the Abatellis palace seems to have been taken directly from the Valencian “Lonja”. On each side of the door there are two tombstones with the emblem of the Catholic Kings, and one of them reads that the palace was built in 1475 by order of Francisco Patella. The architectural forms of this Catalan and Valencian fourteenth century Gothic styles are found not only in Palermo but in many other cities in the island: the Bellomo palace, in Syracuse; the Finocchiaro palace, in Randazzo; the Ciampoli palace, in Taormina… Some of these places were ceded as feudal properties to some members of the Catalan and Aragonese nobility, a situation that helps to explain the architectural style of these buildings. Therefore, it is not surprising that the church of Santa María del Jesús de Modica was built in Catalan style: its facade resembles the layout of the door of the Piety of the cathedral of Barcelona; this church was founded in 1478 by Ana de Cabrera, the wife of the admiral Cabrera of the house of Aragon.

The church of Santa Maria della Catena, in Palermo, shows how freely Gothic and classical forms were combined. Its columns responded to the measurements of the Corinthian module given by Vitruvius and later repeated by Renaissance writers. On the other hand, the frieze that crowns the facade is indeed a Gothic “structural embroidery” using the same theme that crowns the palace of the king Martin in Poblet and the facade of the Palau de la Generalitat de Catalunya. In addition, the same type of segmental arches* appeared in the Sicilian church and in the palace of Barcelona aforementioned. Another example of this same “sharing” of architectural forms is the portico of the church of San Jaime de la Marina, in Palermo, so similar to that of della Catena. As can be seen, all these constructions show a hybridism or introduction of classical elements in a Gothic styled building typical of Catalan and Valencian constructions exemplified again by the Lonja de Valencia and the Palace of the Generalitat de Barcelona. 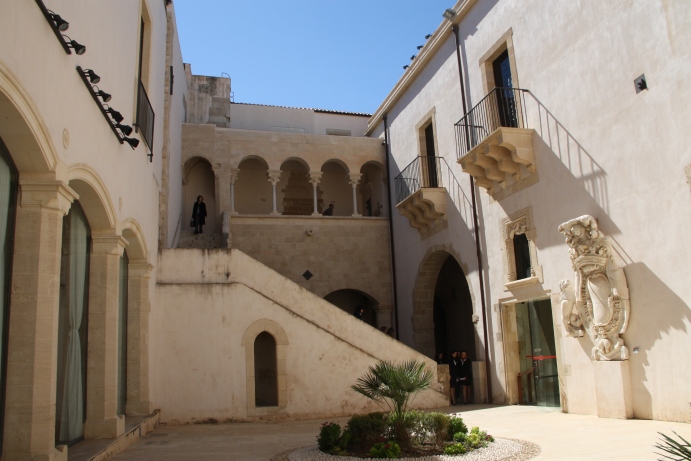 A view of the second courtyard of the Museum of Palazzo Bellomo in Ortigia the historical center of Syracuse. The Bellomo palace is a XIII-XIV century building that follows the typical design of others Catalan-style civil Gothic buildings, like the Palazzo Abatellis in Palermo.

In Sardinia, the Gothic style was also imported by Catalan and Valencian architects. In Alghero, the Catalan language is still in use and it represents an expansion of the Catalonian maritime territories, for this reason it is not surprising to see its cathedral completely constructed in Catalan Gothic style. In addition, in the rest of the Sardinia island, the influences of the Gothic styles of the Mediterranean regions ruled by the crown of Aragon were very strong. The great church of the Franciscans in Cagliari is very characteristic within this style.

In Italy during the XIV and XV centuries, the minor arts were represented by wonderful works, many of them already made within the spirit of the Renaissance. They will be discussed in their corresponding essay, but now we can cite the Italian textiles with medieval styles and whose motifs frequently appeared in the luxurious garments wore by the characters depicted in altarpieces and miniatures. These rich silk fabrics were woven in several cities, above all in Siena and specially in Lucca.

The previous account is almost a complete inventory of the Gothic architecture in Italy, or at least of those constructions influenced by Gothic trans-alpine styles. The religious monuments mentioned in the last three essays mainly represent imported styles imposed by foreign artists: Angevins, Catalans, Germans… who dominated parts of the Peninsula. The Italian people received them as a novelty, but without enthusiasm; for them, the true art was that ancient classical art that even during the Gothic centuries was striving to reborn.

Segmental arch: An arch whose curve is a circular arc of less than 180 degrees.