In order to simplify the account of the Mesoamerican pre-Hispanic art, it is appropriate to analyze the art that took place in each of the four main areas of ancient Mexico from the beginning of the Classic period (AD 200) to the Spanish conquest (1519), namely: 1) The central Mexican plateau, 2) the area of Oaxaca, 3) the Gulf of Mexico and finally 4) the immense Mayan zone.

Art of the Central Mexican Plateau

To the northeast of the valley of Mexico rises Teotihuacan, the great Mesoamerican ceremonial center in which between the II century BC and the II century AD were erected the great pyramids of the Sun and the Moon whose majestic contours harmonize with the silhouette of the surrounding mountains. It was precisely around these pyramids that a great sacred city was developed and whose splendor attracted pilgrims coming from all parts of Mesoamerica for several centuries.

Few cities from the ancient world had the number of temples present in Teotihuacan and, as a unique phenomenon in those times for the American continent, a true city in all the extent of the word. A city built around an immense ceremonial center whose main axis was the broad Avenue of the Dead. Along two kilometers, from the Square of the Moon to the wrongly named Citadel, temples and large ceremonial complexes follow one after another. Among these constructions stands out the Citadel that encloses one of the most beautiful buildings of ancient Mexico: the Temple of Quetzalcoatl or Temple of the Feathered Serpent, a real marvel of stone carving especially if it is considered that it was made without the aid of any metal tools.

The construction of this pyramid of Quetzalcoatl, dating back to the third century AD, marks in Teotihuacan the appearance of an architectural element that was destined to profoundly influence the art of other Mesoamerican civilizations. It is the so-called “talud-tablero*” (literally “board on a slope”), that is the peculiar combination of a “board” or horizontal projecting body with the inclined plane or “slope” that constitutes the core of the stepped pyramid. Both elements, together with the wide central stairway lined with protruding logs with reliefs, became inseparable elements of the religious architecture of this city contributing to underline the tendency towards horizontality that dominates throughout the urban planning of Teotihuacan.

No less surprising is the urban development achieved in Teotihuacan: to the rigorous planning of the great ceremonial center, the channeling of the rivers and streams that once crossed the city (forcing them to adapt to the needs of the urban layout), and the controlled increase of the residential areas by means of a fairly regular grid of streets and avenues, all rigorously drawn at right angles and following the initial orientation given by the Pyramid of the Sun whose main facade face exactly to the West on the day the Sun passes through Zenith in this city. Considering also the existence of large tanks for rainwater storage, specialized workshops for the elaboration of certain products, silos, open public markets (the typical indigenous “tianguis*” that still exists today), theaters and areas destined to the traditional Mesoamerican ballgame, groups of administrative buildings, etc. All these features are enough proof than as from the third century AD for the first time in the American continent arose a true urban context.

The astonishment of other contemporary peoples, including the refined Maya, should have been great when they came from their distant lands to attend ceremonies at Teotihuacan. The spectacle of the Avenue of the Dead bordered by multiple sanctuaries wrapped in thick clouds of “copal” (the Amerindian incense) had no parallel then and continues to astonish the visitor today despite its advanced state of destruction. And it is not surprising that the Aztecs, who only knew it as an impressive pile of debris, gave it in their mythology the name of Teotihuacan (or “City of the Gods”), and identified it with the place where gods had gathered to give rise to the “Fifth Sun” the same one that still illuminates us according to indigenous beliefs.

Perhaps we will never know the original name of this great city, so famous among its contemporaries that people from all Mesoamerica avidly acquired their pottery and other products and took for themselves many facets of their complex iconography for the realization of their own art forms. This city of ca. 22.5 square kilometers was decorated with wall paintings that practically covered all the buildings. The remains of these paintings are those that, together with ritual ceramics or other archaeological evidence, speak more clearly of the Teotihuacan soul.

Teotihuacan mural painting reveals very different aspects of the eminently religious thought of this town. Everything here seems to have been subjected to a complex process of abstraction in which the colors themselves had acquired a symbolic value as it happened in ancient Egypt. Thus, green was not only the color of the long and beautiful feathers of the quetzal bird or jade (two precious objects at those times), but can also be related to the new and tender vegetation that covers the Earth year after year; green could also be related to rain drops or dew, one of the most precious elements in that Mexican semi-arid highlands where water has always been considered a blessing. And in the same way, red was the blood, another precious liquid… In this highly esoteric symbolism were depicted scenes of mythological animals, processions of richly dressed priests or the charitable deities of the ocean and rain. Directly or indirectly, everything in Teotihuacan seemed to be associated with the god of water and rain, the distant antecedent of the Tláloc of the Aztecs and one of the oldest deities of the agricultural peoples of Mesoamerica probably derived from the numen* “werejaguar” Olmec.

This rain god is usually represented by lightning or holding the “cloud scepter” in hand, presiding over ritual planting or maize harvesting, or more often, pouring thick raindrops or dispensing abundance under the disguise of rain in finely carved jade artifacts… One of the most moving messages of the Teotihuacan pictorial art shows the god Tláloc in his paradise, the Tlalocan, a tropical paradise, ideal place for those men of the rude Mexican plateau; place of songs, naive games and aquatic delights between butterflies and dragonflies fluttering on the banks of turbulent rivers lined with cacao trees, flowers and corn plants.

The most characteristic form of Teotihuacan ritual ceramics is that of flat-bottomed tripod vessels with slightly concave walls and tapered tops. In addition, the frequency with which Teotihuacan vessels appeared in other regions of Mesoamerica is an eloquent testimony of the influences that the “City of the Gods” exerted abroad.

One of the most refined aspects of Teotihuacan art is the ritual mask generally carved in stone and finely polished. With their foreheads cut, their ears almost rectangular and their simplified and well cut features, these masks seem to participate the geometric style that also characterized the architecture of that city.

In the 7th century AD, a fire partially destroyed Teotihuacan marking the beginning of a process of abandonment and the consequent cultural decay in which for more than two centuries the valley of Mexico would fall. At that time the incursions of nomadic tribes coming from the north of the country were frequent. Nevertheless, in spite of these migratory waves that anticipated the disintegration of the classic Mesoamerican world, other towns like the Zapotecs, and especially the Mayas, produced still until the beginning of the X century the most beautiful examples of their artistic legacy.

Numen: A Latin term for “divinity”, or a “divine presence”, “divine will”. 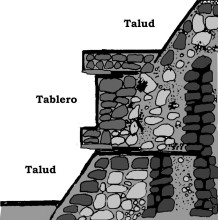 Talud-Tablero: Talud-tablero (or slope-and-panel) is an architectural style commonly used in platforms, temples, and pyramids in Pre-Columbian Mesoamerica. Talud-tablero consists of an inward-sloping surface or panel called the talud, with a panel or structure perpendicular to the ground sitting upon the slope called the tablero. Talud-tablero was often employed in pyramid construction in Pre-Columbian Mesoamerica, although is strongly associated with the Teotihuacan culture of central Mexico. There were different variants of the talud-tablero style throughout Mesoamerica, and associated with various cultures.

Tianguis: A tianguis is an open-air market or bazaar that is traditionally held on certain market days in a town or city neighborhood in Mexico and Central America. This bazaar tradition has its origins in the pre-Hispanic period and continues essentially unchanged into the present day. The word tianguis comes from Nahuatl, the language of the Aztec Empire.

14 thoughts on “Pre-Columbian Art of Mexico, The Central Mexican Plateau-Teotihuacan”