Besides the Central Mexican plateau, another area that occupies an important place within the rich Mesoamerican archaeological complex is the Oaxaca region which from the last centuries before the present era (during the Upper Pre-Classic period) constituted a vigorous cultural center with marked Olmec influences.

It was in Monte Albán that during an uninterrupted historical development of near two thousand years in the last phases of the Pre-Classic period (1800 BC-200 AD) a series of decisive elements of the Mesoamerican history appeared, such as the creation of a “glyphic” writing system and the crystallization of some mythological concepts based on the oldest clearly identifiable deities whose cult evolved in the following centuries and whose origin goes back to the Olmec cult of the “werejaguar“.

Monte Albán was also one of the first ceremonial centers in Mesoamerica that featured long lasting constructions. The testimonies of the beginnings of this architecture were shaped by large stones with deeply engraved silhouettes of characters represented in a dynamic attitude (and that for this reason have been called “dancers”) and alongside them are some remains of what perhaps was the oldest writing system in the New World. In addition, the strange pointed-base building, still preserved in the center of the large square of Monte Albán, could be the oldest astronomical observatory known in Mesoamerica.

This early cultural vocation of the inhabitants of Monte Albán will culminate, during the first millennium of our era, in what was the classic splendor of Zapotec art. In the early artistic stages of the Monte Albán culture we can see some influences of Olmec origin that were quickly assimilated and powerfully transformed during the splendor of the Zapotec art just as happened with Teotihuacan influences in the Maya art.

In the same way that the people from Teotihuacan built their great sacred city in the middle of a wide valley and in harmony with the surrounding landscape, the founders of Monte Albán chose for the same purpose the summit of a mountain chain that dominate several valleys. Subsequently, the Zapotecs periodically remodeled the enormous ceremonial center that crowns those mountains and covers an area of ​​almost forty square kilometers. And although only the central part of Monte Albán has been explored and partially restored, all the neighboring hills still have an impressive succession of retaining walls, squares and mounds in ruins.

Monte Albán houses one of the most important architectural complexes in all Mesoamerica in which stands out the Great Plaza (Great Square) that measures about four hundred meters long bordered to the East and West by various buildings and limited to the South and North by two immense artificial platforms which, like an “acropolis”, include other groups of buildings. Of these two platforms, the northern one is incomparably the most important with its large “sunken patio” and its gigantic portico* dominating the Great Plaza showing the remains of thick masonry columns ca. two meters in diameter. No less colossal is the stairway that communicates this portico with the square and that’s flanked by a frame of an enormous width.

The ingenious adaptation of the Teotihuacan “talud-tablero” to the Zapotec architectural needs generated the so-called “tableros de escapulario*” (“scapular” panels) that generate lines of shadow that underline the sober monumentality of the whole building. The architectural complex of Monte Albán presents a harmony and a unity that place it among the most amazing artistic realizations of the pre-Hispanic world. Due to its high location, the flexible balance of its masses, and the enormous scale of its conception, Monte Albán embodies one of the most important characteristics of Mesoamerican urbanization: the dominance over large open spaces combined with platforms, stairways and temple foundations.

At the same time that Monte Albán was the main ceremonial center of the Zapotecs, it also functioned as an important necropolis. The cult of the dead, extraordinarily rooted in ancient Mexico, acquired here a primordial place giving rise to an elaborate funerary architecture and the creation of innumerable clay urns. These represent the most characteristic aspect of Zapotec art, while integrating the richest range of mythological beings from animals such as jaguars and bats, relate to the gods of rain and corn, to complex deities, through “escort” effigies or tomb guardians.

In the midst of this rich production of funerary urns, stood out by their unmistakable style the figures of deities with haughty faces, seated with crossed legs and wearing tall and complicated headdresses, amidst which a mask was usually attached. Their hands usually rest on their knees, while thick pectorals* hang on their chests. Beside the funerary urns, some objects were carved in fine stones, such as the beautiful mask of the god “werebat” made of several finely polished pieces of jade now housed at the National Museum of Anthropology of Mexico City.

After nearly fifteen centuries of uninterrupted cultural evolution, the Zapotec region suffered the invasion of the Mixtecas towards the tenth century AD at the end of the Classical period. Monte Albán, along with other Zapotec ceremonial centers, continued to subsist in part although with a strong Mixtec influence. This is how the buildings built in places such as Mitla, though framed within the lines of the Zapotec “tablero escapulario” mentioned before, show some exquisite variations around the theme of the “grecas escalonadas “, an indisputable feature of the Mixtec culture that will be discuss next. 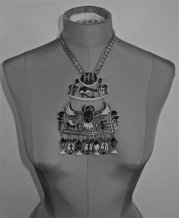 Pectoral: An ornamental breastplate or form of jewelry  worn on the chest. 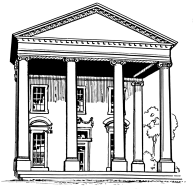 Portico: A structure consisting of a roof supported by columns at regular intervals, typically attached as a porch to a building.

Tablero de Escapulario: (from Spanish meaning “scapular panel”). “Scapular panel” is a term referring to the type of cornice used in the decoration of the panels of Monte Albán. It consists of a double molding that crowns, perpendicularly with respect to the surface of the earth, the slope of the platforms of the city (the city’s “slope-panels” or “talud-tableros“). This architectural feature will be repeated in constructions of other localities in the Valleys of Oaxaca, like Mitla, Yagul and Lambityeco.

6 thoughts on “Pre-Columbian Art of Mexico, Art of the Oaxaca region-Monte Albán”