The cultural panorama of Peru changed towards the year 4000 BC with the advent of rudimentary agricultural forms; this period, which lasted until 1500 BC apparently didn’t produce ceramics, but during this time the first ceremonial centers were erected. The oldest known center is the one of Huaca Prieta in the valley of Chicama (northern Peru). Here several pre-ceramic centers were found that allowed to determine that cotton was cultivated from the year 2500 BC.

The most important architectural centers of this pre-ceramic period are the complex of Las Haldas and the Temple of the Crossed Arms in Cotosh (Peru), both dating to about 1800 BC. The site of Las Haldas, in the valley of Casma (northwest of Peru), includes a group of houses next to a ceremonial center; this last is dominated by a pyramidal building with seven platforms, its length is 465 m and presents several opened quadrangular enclosures arranged according to a symmetry axis. Some of its walls were built in basalt.

The Temple of the Cross Arms, also in Cotosh, is the oldest in the sierra. It is a ceremonial center formed by quadrangular enclosures bounded by walls of edged stone joined with clay mortar. The walls are high and have niches where some offerings were found. On these walls there are some crossed arms modeled in clay in a primitive style hence its name. In the center there is a patio with the remains of a bonfire. 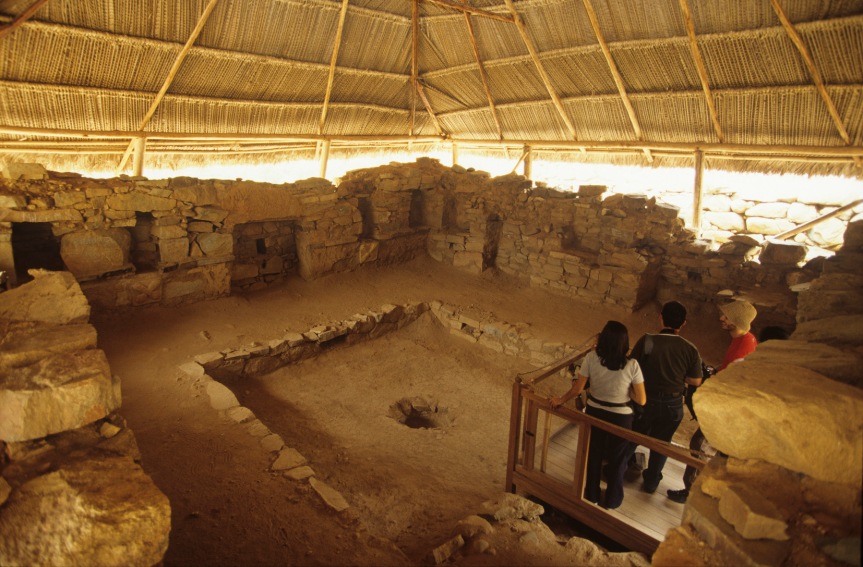 Interior view of the Temple of the Crossed Arms in Kotosh, an archaeological site near Huánuco (Peru) containing a series of buildings with six periods of continuous occupation. The image of crossed arms is characteristic for this particular temple iconography.

The oldest known pottery was found at the north coast of Peru and is called Guañape (early). It lacks painting and is decorated with incised lines in the shape of the letter M. It also shows incisions done using nails on the fresh clay. This ceramic is generally shaped like a pot with a thickened edge. The Guañape pottery has been dated ca. 1250 BC.