The first known cultural remains in the South American Andes date from the tenth millennium BC and correspond to the so-called “Chuqui industry”. This “industry” produced small stone artifacts, such as burins* and spokeshaves. The lithic archaeological remains known as Chivateros (northwest of Lima, Peru) were slightly more recent and characterized by the production of a large number of bifacial instruments carved by lithic reduction*: knives, spokeshaves and long spearheads. Chivateros was a culture mainly oriented towards the exploitation of plants although it gave some importance to hunting. To this first phase of Chivateros also corresponded the culture of Vizcachani, an archaeological site located in the department of La Paz in Bolivia. In northern Chile, the oldest site is that of Gatchi near San Pedro de Atacama.

In Lauricocha (Peru) were found a series of caves and lithic remains dated between the eighth and second millennium BC. This was a culture of hunters provided with an advanced lithic industry and related to the hunting of deer and guanaco, a camelid native to South America. Their lithic artifacts were mainly characterized by their foliaceous spearheads exhibiting the typical “willow leaf” form. Along with these “leaves” were also found unifacial and bifacial knives, arrowheads and scrapers. The spearheads often have denticulated edges.

Remains of rock art, also dated to the eighth millennium are represented by the paintings found in the cave of Toquepala, in the mountainous area of ​​Moquegua (Peru), where hunting scenes were depicted including human silhouettes chasing herds of guanacos. These figures never exceed 22 cm in height and are painted in black, white, red and yellow. Rock painting is relatively frequent in Peru and Bolivia, and the pictographs of Kala-kala in the department of Oruro in Bolivia are among the most significant.

Burin: (From the French burin, meaning “cold chisel”). A special type of lithic flake with a chisel-like edge which prehistoric humans may have used for engraving or for carving wood or bone. 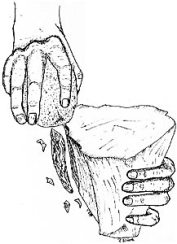 Lithic Reduction: Technique involving the use of a hard hammer percussor, such as a hammerstone, a soft hammer fabricator (made of wood, bone or antler), or a wood or antler punch to detach lithic flakes from a lump of tool stone called a lithic core (also known as the “objective piece”). As flakes are detached in sequence, the original mass of stone is reduced; hence the term for this process. Lithic reduction may be performed in order to obtain sharp flakes, of which a variety of tools can be made, or to rough out a blank for later refinement into a projectile point, knife, or other object. Lithic tools produced this way may be bifacial (exhibiting flaking on both sides) or unifacial (exhibiting flaking on one side only).