During the medieval period the Indian culture gave great importance to sculpture. All the temples both in the North and South were decorated externally and internally with sculptures. The sanctuaries and chapels contained statues (either in stone or bronze) dedicated entirely to the religious cult and in the courtyards several pavilions housed monumental effigies of divine animals such as the bull Nandi of Shiva, the Garuda bird of Vishnu, or the Varaha boar an avatar* of Vishnu.

From all this abundant sculptural production emerged great styles related to each other through the great currents that defined the general evolution of the Indian art. Simultaneously it is necessary to observe the increasingly complex development of the iconographic rules beginning in the period were the Pala style of Bengal was already very advanced up to until the beginning of the XIII century. These artistic developments determined more pronounced features and a growing number of adornments and embellishments, as well as the multiplication of the number of arms and even of heads in the representations of some gods. There was also an undeniable difference between the northern and southern styles with the former showing a trend for dynamic, moved, often contorted attitudes, while the southern style showed restraint, almost coldness, and tended towards calm and balanced attitudes even in the representations of the most lively subjects such as the dance of Siva. In both regions the height of religious sculpture is placed between the Xth and XIIth centuries with its decline beginning in the following centuries.

In the North, the most beautiful sculptural styles are those of Bhubaneswar (state of Odisha), Khajuraho (state of Madhya Pradesh), and Konark (state of Odisha) from the XIIIth century. Those of Gujarat, Rajputana, and the other northern provinces cannot compete with the quality of those although they have undeniable artistic qualities. 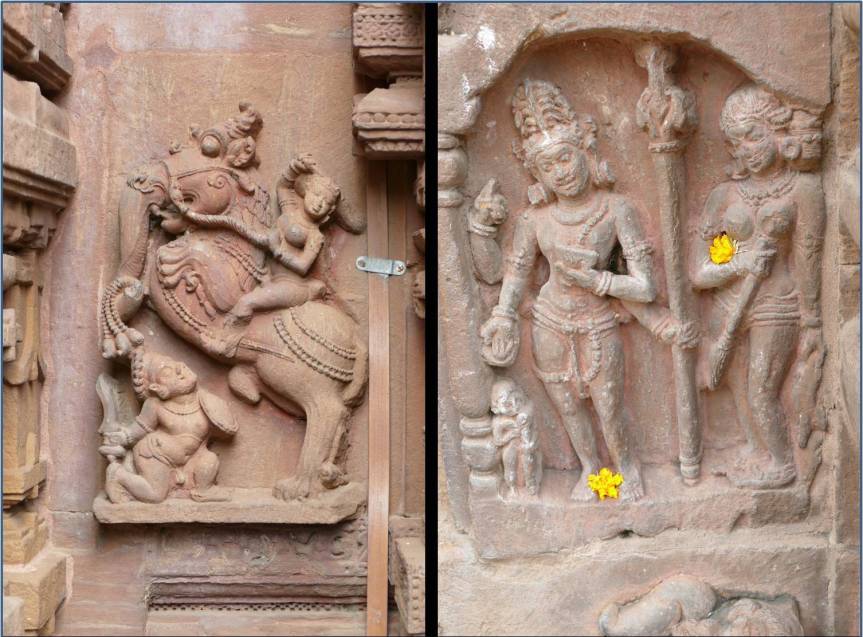 The styles of Bhubaneswar and Khajuraho are closely related despite the geographic distance that separates them and despite the fact that they appeared in different kingdoms. These styles represented the emanation and expression of a typically medieval and feudal society. The first phase of these styles is well illustrated by the exterior decoration of the temple of Mukteshvara in Bhubaneswar (Xth century): here female representations are the most abundant with elegant and well-balanced figures whose silhouette undulates gracefully according to the triple canonical posture or tribhanga. These representations illustrate divine or literary themes: the ball player, the woman with the bird, the one that tears a thorn from her foot, the one that opens a door, the one that touches with her right foot the trunk of a tree, the one that rides a mythical animal, etc. The relief is rotund, jaunty, and light. During the course of the second phase of the same style (XIth-XIIIth centuries) the silhouettes lengthen and the “beauty features” were accentuated: fuller breasts, thinner waist, wider hips, while the facial features were stylized and exaggerated by lengthening the eyes and sharpening the nose that tended to be pointy which will lead during the XIIIth century (above all in Konark) to the development of a very particular facies*. The high relief is then so exaggerated that it almost became exempt sculpture since many parts were completely separated from the background.

On the contrary, the cult images located inside sanctuaries and chapels are static and immutable due to their frontality and the rigidity of their attitudes and gestures. In this aspect, they appeared to be direct heirs of the Pala style of which they perpetuate some particular features. Such is for example the very beautiful effigy of Surya in the temple of Konark (ca. 1250) which undoubtedly corresponds very strictly to the iconographic canons of its time.

During the same period in the southern regions the artistic trends were very different but the excellence of the sculptures was equal. The most beautiful works of this time are seen on the exterior walls of the temples of Thanjavur and Gangaikonda Cholapuram (first quarter of the XIth century). They are great effigies in high and sharp relief, so much that they seem exempt sculptures placed inside niches in the two levels of the main body of the vimana: their slender and refined forms, the soft modeling, and the pure contour of their arms and legs make them works of completely classical perfection.

All these art works may be considered as prime examples of the apogee of the stone sculpture in the southeast of India during the medieval period. The same qualities of style and execution can be found in the numerous bronze cult images dating from the same period many of which were made in Thanjavur or in its vicinity. They were executed using the lost wax technique (as is still done today in the same region) according to a procedure described in several texts of this period and that differs little from the technique used and known in the West. Their size is very variable and therefore their weight, but generally they were destined to be taken out of the temples and transported during processions while the stone icons were usually immovable.

As in the North, the evolution of artistic styles and tastes led the Southern artists to a greater level of mannerism thus perpetuating the artistic traditions. A good example of this evolution during the XIIIth and XIVth centuries is represented by the exterior decoration of the shrine of Venugopala Krishna in the temple of Ranganathaswamy in Srirangam where in the spaces between pilasters are the sculptures of female figures frequent in literary clichés: the modest girl, the one that plays with a parakeet, the musicians, the one that puts the tilaka* on her forehead while contemplating herself in a mirror, etc. The exaggeration of their “beauty features” is evident and their gestures and positions appeared exaggerated. However, it is a style that does have a beautiful quality and that resembles the styles of the North.

Lastly, it is necessary to mention the sculpture of the Hoysala style. It was endowed with a remarkable unity of style, which was characterized by certain heaviness, decorative overload, and iconographic rigor, but was also distinguished by some attitudes showing certain kind of majesty and dignity which give the divine characters a calm and serene look. Their silhouettes were shorter than those of the Chola style and their forms less fine though well balanced.

Avatar: A concept in Hinduism that means “descent”, refers to the material appearance or incarnation of a deity on earth. Theologically, the term is most often associated with the Hindu god Vishnu, though the idea has been applied to other deities. Incarnation concepts similar to avatar are also found in Buddhism, Christianity, and other religions.

Facies: (from the Latin word for “face”). A distinctive facial expression or appearance.

Maithuna: A Sanskrit term used in Tantra most often translated as “sexual union” in a ritual context. Different variations (and translations) of the word maithuna refer to male-female couples and their union in the physical, sexual sense. Just as neither spirit nor matter by itself is effective but both working together bring harmony so is maithuna effective only then when the union is consecrated. Yet it is possible to experience a form of maithuna not solely just through the physical union. The act can exist on a metaphysical plane with sexual energy penetration.

Tilaka: In Hinduism, the tilaka is a mark worn usually on the forehead, sometimes other parts of the body such as neck, hand or chest. Tilaka may be worn on a daily basis or for rites of passage or special religious occasions only, depending on regional customs.