Piero della Francesca was born ca. 1415 in Borgo Sansepolcro (today in the Province of Arezzo, eastern part of Tuscany), near Perugia, and died in the same town in 12 October 1492. During the last five years of his life, Piero lost his sight and had a guide who led him through the streets of his small town.

Piero was born Piero di Benedetto. His father died before his birth, and he was later called Piero della Francesca after his mother, who was referred to as “la Francesca” due to her marriage with Piero’s father Benedetto de’Franceschi. During his formative years, Piero came in contact and trained with several Sienese masters active in Sansepolcro during his youth (e.g. Sassetta). After this period, he entered into the court of Urbino around 1445. The then Count of Urbino, Federico III da Montefeltro, an old condottiero more or less bandit, ruled his state as an enlightened prince lover of arts and letters. He was the one who commissioned the Palace of Urbino from Luciano Laurana, as we have already explained in other essay, and who also called Paolo Uccello and Melozzo da Forli; he also collected medals and old statues, and Alberti himself thought of dedicating his “De Re Aedificatoria” (or ‘Treaty of Architecture’) to him. The first group of Piero’s works belongs to this period: the Polyptych of the Misericordia (1460-1462), the Baptism of Christ (ca. 1448-1450, today in the National Gallery in London) and the Flagellation of Christ (ca. 1468–1470). The Polyptych of the Misericordia was commissioned in 1445 by the Compagnia della Misericordia, a confraternity of Borgo Sansepolcro, and is probably the oldest of the artist’s conserved works, although it already brings together what will be the essential characteristics of Piero’s art: an impressive dignity and calm that derive from a monumental placement of figures in space. This Virgin of Mercy, who’s shown protecting the devotees under her mantle, reproduces a common gesture of the International Gothic iconography (artists like Enguerrand Quarton and Bernat Martorell had similar compositions), but in Piero this silent Virgin, of peasant majesty, radiates on her worshipers an admirable peace, full of ineffable security. The Flagellation of Christ, today still in Urbino, represents a fantastic exercise in perspective that uses elements derived from Alberti’s architecture. But here, Piero places in the crystalline space defined by the columns, the architraves and the floor mosaic, a group of characters typically his own, in which he has refrained to represent their passionate instincts, bitterness and violence so that they remain only as monuments full of dignity within an incredibly serene space.

A little later, from 1452, Piero began his most celebrated work: the decoration of the apse of the church of San Francesco in Arezzo with frescoes on the theme of The History of the True Cross which he finished in 1464. This is considered as one of the masterpieces of painting, and today particularly appreciated for the connection between the harsh spirit, permeated with seriousness and strength, typical of della Francesca, and the general spirit of XXth century art. The narrative program of these frescoes derives from legends in medieval sources related to the finding of relics of the True Cross. These stories were collected in the Golden Legend by Jacopo da Varagine (mid-13th century).

The general effect of these frescoes is unforgettable. In them, Piero defined himself as the painter of space and light; his great concern was to illuminate the scenes and define the figures by means of a diaphanous light.

According to an ancient medieval legend, whose theological purpose was to show the indissoluble relationship between the Old and New Testaments, between original sin and redemption by Christ, the wood with which the Cross was built came from a tree born from a seed that the sons of Adam placed under their father’s tongue when burying him. Thus, Piero begins his story: Adam dying in the arms of Eve, begs Seth to ask the angel of Paradise for the promised seed for the salvation of humanity, while a young man, naked, seen from behind, leans on a cane. A character seen from the front, dressed in a kind of black apron, puts an impressive note in this scene. Other famous scenes of this fresco cycle depict the episodes of Solomon and the Queen of Sheba, and the Annunciation. Further on, other fresco represents Constantine’s dream the night before the battle with Maxentius, when he received divine inspiration to place the sign of the Cross on his banners to obtain victory. We see the emperor sleeping in a half-open tent, but a mysterious light is enough for Piero to indicate that a supernatural phenomenon is taking place inside, and that the emperor isn’t peacefully sleeping, but is dreaming something very important. In the fresco of the battle of the Milvian Bridge, which takes place outdoors, the transparent blue of the sky stands out with more force on the large emblazoned flags that captains wave and on the black tones of the horses of the foreground. Other fresco, opposite this one, represents the Finding and Proof of the Cross by Saint Helena, Constantine’s mother. In it, Piero introduces a female type that he will repeat in later frescoes. She is no longer the Florentine patrician girl painted so many times by Botticelli, but a tall woman, with a straight nose, a robust neck and a broad, clear forehead, with hair carefully gathered by the cap. When not depicting female portraits, Piero della Francesca always used this same type, quite impersonal. 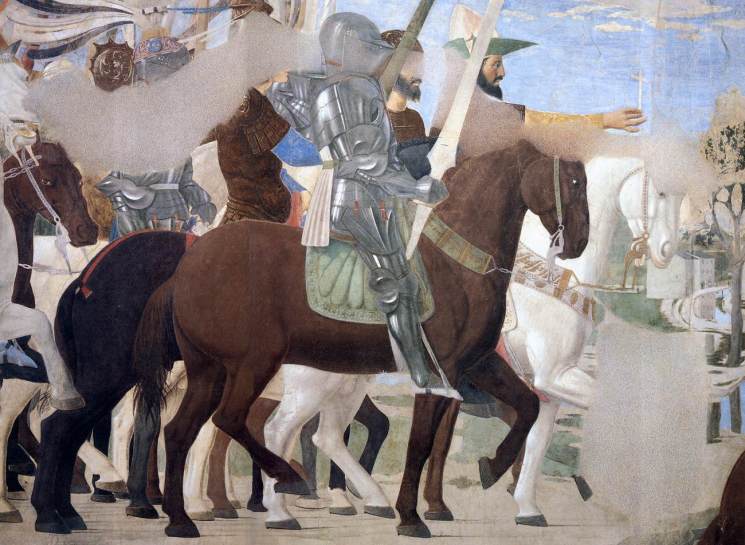 In this same fresco cycle with the story of Saint Helena, on the left, Empress Saint Helena, along with other spectators, attends the Finding of the Cross. On the right, she performs the Proof of the Cross: a naked young man is resurrected when the Cross is placed over his grave while Saint Helena and the ladies of her entourage kneel before the grave. The building that serves as the background to this scene, a basilica decorated with white circles on a dark background (of an incredible architectural novelty), contrasts with the typically medieval view of Jerusalem that appears above the scene of the Finding. Finally, Piero narrates the episode that occurred years later: Khosrau, king of Persia, conquers Jerusalem and steals the Cross. Heraclius, the Byzantine emperor, defeats him in battle and returns the Cross to that city. This battle, a subject that by nature should be dynamic by essence, reveals the extent to which the characters of Piero della Francesca live in a serene, orderly and slow space: the soldiers of Khosrau move slowly, like good workers doing their job. It would seem that the characters in Piero’s scenes are solemn witnesses who seem to show us that “there are men and women who have seen amazing things.”

This monumental work of the apse of San Francesco de Arezzo occupied Piero for several years. During this period, he made some trips to Rome, which laid the foundations of what should have been the Roman school of painting, and painted other various works, very few of which have survived to us: the Resurrection of Christ (ca. 1460’s, Museo Civico, Santo Sepolcro), the Madonna del Parto (ca. 1460 or 1467, Musei Civici Madonna del Parto, Monterchi, Tuscany) and the mural with the figure of St. Mary Magdalen (ca. 1460) next to the entrance to the sacristy of the Cathedral of Arezzo. The last two works show two types of woman characteristic of Piero, in the style of which we have commented before. Like the ladies of the retinues of the Queen of Sheba or of St. Elena, despite their poetic strength, these female figures retain a domestic, provincial aftertaste. The Madonna del Parto has a beautiful wide and open forehead under which are some strange half-open eyes (see picture below); St. Mary Magdalene is represented as a noble and down-to-earth woman, whose strength comes from the posture and features of both her head and neck. These female bodies are above all solid volumes located in space.

In contrast, in the last group of Piero’s works, painted after 1465, he seems to be interested in humanistic individualism. The Double Portrait of the Dukes of Urbino (ca. 1473-1475) shows that the profiles of Federico da Montefeltro and his wife Battista Sforza participate in what most surprised Alberti: the irreducible character of the personality and the deep differences that separate human beings. Perhaps these portraits have influenced the air of psychology that shows up in Piero’s last works. The terrible plague of 1468 forced him to flee his hometown and take refuge in the small village of Bastia.

Piero’s last works are the Madonna di Senigallia (ca. 1474, Galleria Nazionale delle Marche, Urbino), the Nativity (ca. 1470-1475, National Gallery, London) and the Virgin and Saints with Federico de Montefeltro, also called Pala Brera (1472) because it is preserved in the Pinacoteca di Brera, in Milan. Probably all were painted in the decade of 1470-1480, during which Piero frequently resided in Urbino. The Madonna di Senigallia, one of Piero’s most beautiful works, surprises us with its ability to harmonize the monumental with the intimate. In this Virgin there’s no hint of the impassivity of the priestesses of his Arezzo frescoes, but we find in her the calm of an ancient dynasty of kings. In the Nativity of London, the fine Virgin, with pointed chin, takes us away from the feminine type to which Piero has accustomed us, and the whole of the work shows that the artist moves away from abstraction to devote himself to the observation of detail, of the anecdote, with an exquisite taste for small wild flowers, mosses, birds, details of luxurious garments and jewelry. Finally, in the Pala Brera, next to the impressive portrait of Federico da Montefeltro clad in his shining armor, we find again the delicious geometry young Piero painted for the Flagellation of Christ in Urbino. In this painting ten characters describe a semicircle around the Virgin; behind them there’s an apse made up of as many porphyry panels, which support a coffered barrel vault and a monumental marble shell. We can also see a shocking detail due to its mystery: an eggshell hangs by a thread in the center of the space, exactly above the head of the Virgin. An impossible transparent light falls on the characters, without bathing them with shadows.

Now an old man, enriched by so many experiences, Piero retired at the end of his life to the town where he was born, Sansepolcro. There he wrote —before blindness condemned to darkness and emptiness to this artist who was the brilliant painter of atmospheric light and volumes in space— two treatises in Latin on perspective and geometry, On Perspective in painting (“De Prospectiva pingendi“, mid-1470s to 1480s) and Short Book on the Five Regular Solids (“De Corporibus regularibus“, 1485) respectively, both the result of a long meditation that he had experienced throughout all his life. Piero made his will in 1487 and he died five years later, on 12 October 1492, in his own house in Sansepolcro. Piero’s art with its geometrical perfection and depictions of almost magic atmospheric light inspired modern (20th century) painters like Giorgio de Chirico and Felice Casorati.

Golden Ratio: In mathematics, two quantities are in the golden ratio if their ratio is the same as the ratio of their sum to the larger of the two quantities. It is represented by the Greek letter phi (

12 thoughts on “PAINTING DURING THE EARLY RENAISSANCE (1400-1495). PAINTERS OUTSIDE TUSCANY. Piero della Francesca”