One of Piero della Francesca’s disciples was Melozzo da Forlì, born ca. 1438 in Forlì (now a municipality in Emilia-Romagna, and the capital of the province of Forlì-Cesena). Melozzo was thought to be born in a wealthy family named Ambrosi from Forlì. During his formative years he was also influenced by Andrea Mantegna.

Later, Melozzo moved to Urbino, probably between 1465 and 1474, to work for the Duke Federico da Montefeltro. While in Urbino, Melozzo met Piero della Francesca, who would have a profound influence in his style and use of perspective. He also had the opportunity to study architectures by Bramante and the work of Flemish painters who were then also working for the Duke of Urbino, in fact, Melozzo probably worked in collaboration with Justus of Ghent and Pedro Berruguete to decorate the studiolo of the Ducal Palace.

Pope Sixtus IV called him to Rome around 1472-1474 to decorate the Vatican Library. For these set of frescoes Melozzo painted the three rooms of the Library, and in 1477 he finished his first major work, the only one that remains from these set of frescoes and that was later transferred to canvas. This interesting fresco represents Sixtus IV Appointing Platina as Prefect of the Vatican Library. This fresco, detached from its original place, today occupies a place of honor in the Pinacoteca Vaticana (the Vatican Painting Gallery). In this fresco, the portraits are admirable, as well as the color scheme, soft and very natural; but, furthermore, Melozzo could be recognized as a disciple of Piero della Francesca because of this fresco’s background painted with an admirable sense of perspective with the windows of a gallery seen in the distance, through which light enters illuminating the whole room. However, what was new and surprising about this work, the great contribution of Melozzo da Forlì, is his new sense of perspective based not only on the convergence of lines towards the “vanishing point” located on the horizon (according to Brunelleschi’s teachings and practiced by all Florentine artists), but on an aerial perspective based on a bold foreshortening from the bottom up. In this way Melozzo obtained extraordinary results: the viewer thinks he/she is contemplating the figures and architectural elements from below.

Between ca. 1472-1474, Melozzo painted the vault of the apse in the Basilica of the Holy Apostles in Rome with the Ascension of the Christ between angels, which was considered one of the most beautiful of his works. These frescoes were also detached from their original location, and their fragments went on to adorn the staircase of the Quirinal Palace (the figure of Christ who appears boldly and effectively foreshortened), while others are now in the Vatican in the sacristy of St. Peter’s and which had a strong influence in the work of Raphael. Despite them being very mutilated, they are today one of the innumerable art jewels conserved in Rome. From these frescoes, the set of Angels by Melozzo (today in a hall in the Vatican Museums) appear as youthful and strong figures, somewhat feminine because of their perfect hair curls and elegant gestures; each one plays a musical instrument with solemn delight: the violin, the lute or the tambourine. Another work from his Roman period is an Annunciation that can still be seen in the Pantheon. 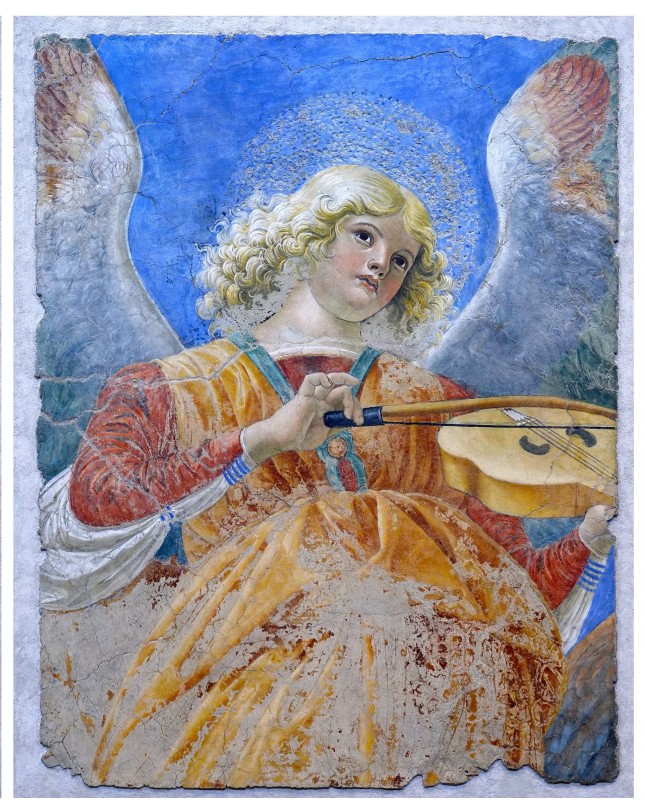 After the death of Pope Sixtus IV in 1484, Melozzo moved from Rome to Loreto, where he decorated with frescoes the dome of the sacristy of San Marco in the Basilica della Santa Casa, commissioned by cardinal Girolamo Basso della Rovere. This is the only one of his works that has been preserved intact, finished ca. 1488, and that reflects the artist’s taste for flying figures captured in fantastic foreshortenings. This is one of the first examples of a cupola decorated both with architecture and figures, and it went to greatly influenced the Camera degli Sposi painted by Andrea Mantegna between 1465-1474. 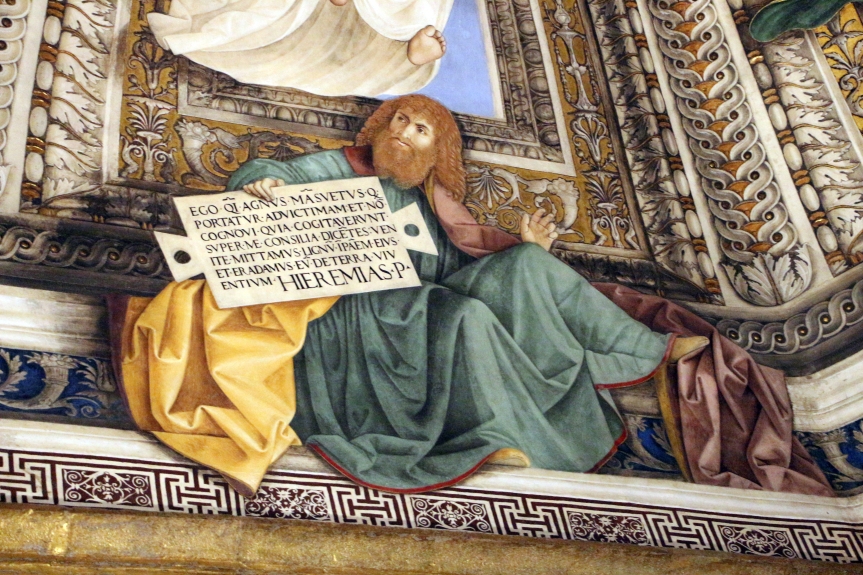 Melozzo died in November 1494 in Forlì and is buried there in the Church of the Santissima Trinita (Most Holy Trinity). While today we know few of Melozzo’s pictorial production, art scholars agree that he contributed to the evolution of pictorial art through his care and finish in painting, his fine and dignified figures, and above all his bold and novel use of perspective. The paintings of Melozzo strongly influenced the work of Michelangelo, Raphael and Donato Bramante.

Simultaneously with all these events, the stay of Piero della Francesca in Ferrara, around 1450, had a decisive influence on local artists. The pictoric tradition of the International Gothic, with Flemish reminiscences of the works by Van der Weyden, mixed there with the artistic novelties contributed by Piero: a new spatial sense, dramatic realism and serene compositions showing precision and calm. The combination of all these ingredients heavily influenced the works of Cosimo Tura (ca. 1430 – 1495), Francesco del Cossa (ca. 1430 – ca. 1477), both from Ferrara, and Andrea Mantegna (ca. 1431 – September 13, 1506) born in Isola di Carturo, close to Padua, but who also happened to be in Ferrara in the mid-15th century. Perhaps the most representative work of this unusual mixture of Gothic linearism and Renaissance plasticism is the marvelous series of frescoes painted in 1470 by Francesco del Cossa in collaboration with Cosimo Tura, for the Palazzo Schifanoia in Ferrara. This is a vast fresco cycle with allegories about the zodiacal signs and months of the year. One of these allegories, and one of the most remarkable images in this series, is the horde of naked toddlers in the Allegory of May – Triumph of Apollo, apparently painted as a symbol of springtime’s prolific blossoming, the crowded rows of babies looks like a modern phalanx of infantile Rockettes dancers. The Allegory of April includes the Triumph of Venus, in which gentle groups of pairs of lovers walk and embrace on a river bank, thus recreating the climate lived in those times in the court of Borso d’Este, in Ferrara; it also has a depiction of the three Graces, one of the earliest Post-classical representations of this theme in painting, and that together with the strange architectures of rocks and plants, adds a touch of mysterious poetry to the whole of the composition. Even today we are moved by that humanism that exudes from the observation of these frescoes, together with an acute sense of reality and with a delicate elegance reflected by the costumes and attitudes of the various characters.

Guilloche: A decorative technique in which repetitive architectural patterns of intersecting or overlapping spirals or other shapes are used.