Although Giorgio Vasari in his 16th-century book “Lives of the most excellent painters, sculptors and architects” (1550, enlarged 1568) gave credit to the works of Cimabue and Giotto to explain the origin of the renaissance of painting in Italy, today it is well known that without ignoring the evident progress and important contributions that Cimabue and Giotto gave to the art of painting, it is also understood how much these masters learned from the old traditions of Italian painting which during the Middle Ages didn’t stop producing interesting works, especially in Rome.

In Tuscany a series of liturgical furniture were produced with images painted on wood which were the product of a local tradition. In some of them the image of Saint Francis was already represented. But the best known of this liturgical furniture were 13th-century crucifixes painted on wood which were hung from a high bar in the middle of the main altar or in the presbytery. Some are stored now in the Museo dell’Opera del Duomo in Pisa, others can be admired in those of Perugia or Bologna. The tradition attributed them all to some artist named Giunta Pisano (worked from ca. from 1202 to 1236), a first Tuscan painter borne in Pisa, but some bear other artists’ signatures. Sometimes these crucifixes show a widening of the table on each side which included figures of the Virgin and St. John and scenes of the Passion in which artists began to familiarize themselves with a new iconographic repertoire.

In addition, the Tuscan artists prior to Cimabue and Giotto painted altarpieces with the image of the seated Virgin surrounded by angels and saints. In the oldest of these images, from the beginning of the 13th century, they aren’t much different to the Byzantine icons except for the primitivism with which they were executed. The Virgin was represented in half-body or sitting in an ivory throne, as she used to be represented in Byzantium, with the folds of her robe indicated by gold lines without the use of relief or chiaroscuro. The small paintings located to the sides of the main image still had a Byzantine character, they represented the evangelical tradition, but the iconography was modified and in the end they only had of Byzantine certain oriental-style forms of the temples and the backgrounds and landscapes.

Vasari, in addition to also mentioning Giunta Pisano, recalled the name of another one of those Tuscan first painters, Margaritone d’Arezzo (ca. 1250-1290), of whom he said in the short biography he dedicated to him that “he was considered excellent among the other painters of that time that worked in the Byzantine way”. An altar front signed by Margaritone, which is today in the National Gallery of London, indicates however the poor progress achieved by this painter, its importance comes mainly from being a signed work. Much more personality and artistic distinction was shown in the works of another Tuscan, Florentine and somewhat more recent artist, named Coppo di Marcovaldo (ca. 1225 – ca. 1276).

We also know some works by a painter contemporary of all these Tuscan artists: the great Roman artist Pietro Cavallini (1259-ca. 1330) of whom we have very notable frescoes in the monastery of Santa Cecilia in Trastevere in Rome, some mosaics in the church of Santa Maria in Trastevere and other works in Rome, and in the upper church of Assisi. Artistically speaking, Pietro Cavallini was a thousand times above the afore mentioned Tuscan painters. 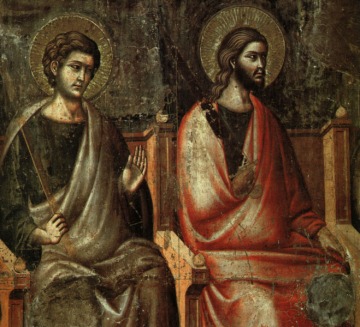 It should be noted that Vasari, who could not fail to mention a name as big as that of Cavallini, in his eagerness to attribute to Tuscany all the glory of the creation of the new renaissance in art, placed in second term this great painter active in Rome making him appear only as one of Giotto’s disciples. But it is known that Cavallini belonged to the previous generation to Giotto’s and that from Rome he went on to decorate a part of the new basilica of Saint Francis in Assisi, where he could very well coincide with Cimabue and communicate to the young Florentine master the advice and technique of old medieval Roman art.

However, a master as important as Cavallini passed almost without leaving disciples in Rome; his artistic spirit flowed to Tuscany where, in Florence through the works of Cimabue and Giotto, a rebirth of the classical forms begun and was destined to continue. In the works of Cimabue (ca. 1240-1302), the first great master of the school of Florence, is always visible something of the typical disposition of the Virgin and saints used by the painters of the Byzantine school, works that Cimabue could have seen executed in the baptistery of Florence.

Little has been preserved of Cimabue’s work. There is, however, a fresco in Assisi, which we will discuss later, and two paintings of Madonnas sitting among angels, one located in the Uffizi Gallery in Florence (initially placed in the Trinity Church in Florence), and another kept in the Louvre.

The type of the iconography of the Virgin created by Cimabue reflects such sweetness that these female figures are enough to consider him as the true father of modern painting. His style is also essentially Florentine: the aristocratic elegance of this type of Virgins will always be the dominant feature of the school of Florence.

The other painting attributed to Cimabue is the fresco representing the Virgin with angels, located in the apse of the Basilica of Saint Francis of Assisi. On one side of the Mother’s group with the angels, Saint Francis was already represented showing that skinny, sharp type that his image will keep perpetually. However, Cimabue’s repertoire doesn’t seem to have been very extensive; he did not venture like Giotto, his disciple, in the exploration of new themes, nor did he compose, like Giotto did, extensive programs featuring new stories.

After Cimabue, another painter named Giotto, his disciple, had to surpass him in passion and emotion, as Giovanni Pisano, son of Nicola Pisano, did surpassing the artistic concepts of his father, the founder of the new school of Italian sculpture.

Maestà: (From the Italian meaning “majesty”). An iconic formula of the enthroned Madonna with the child Jesus, whether or not accompanied with angels and saints. The Maestà is an extension of the “Seat of Wisdom” theme of the seated “Mary Theotokos”, “Mary Mother of God”, which is a counterpart to the earlier icon of Christ in Majesty, the enthroned Christ that is familiar in Byzantine Mosaics.

Velatura: (From the Italian, “Glaze” in English). Velatura is a pictorial technique, in which the artist superimposes layers of transparent paint. The previous color is expected to dry, so that a new translucent mixture is applied. Oil paint was preferred for this type of technique, due to the delay in drying. Acrylic paint also allows for this type of procedure.