The designations Gothic, Gothic architecture and Gothic art originated in a shabby confusion of ideas during the Renaissance.  The adjective “Gothic“,  which has nothing to do with the nature of this artistic style or its origin, was coined by the Florentine artist and writer Giorgio Vasari, a pupil of Michelangelo, who published his famous work on the biographies of Tuscan painters called Lives of the Artists.  In the introductory chapters of his book, Vasari included short essays about the arts of painting, architecture and sculpture, and when dealing with the description of the monuments from the Middle Ages he mistakenly attributed various of their architectural features to the “Goths” (then considered Barbaric  tribes) whom Vasari thought as responsible for destroying the ancient classical buildings after they conquered Rome in 410 and who later constructed new monuments following their own “Gothic” style.  In consequence the word “Gothic” in art was initially used as a synonym for “Barbaric” and was therefore used pejoratively.  According to Vasari, this “Gothic” (medieval) style was confusing and messy, without the adequate proportions and measures of the classical orders.  These writings of Vasari became popular and his line of thought prevailed until the middle of the XIX century, when writers of the French Romanticism, especially Chateaubriand and Victor Hugo, made the apology of the Gothic cathedrals and styles and finally recognized them as the apotheosis of the religious spirit of the Middle Ages.  Soon after, the designation of Gothic art was questioned by trying to replace it with the name Ogival art, and art scholars began to study the place of origin of its architectural forms and the development and evolution of its techniques and styles.  For some scholars, the Ogival style had come from the East; for others, the Ogival architecture, barbaric in origin, had started in Germany and from there moved to France to later spread  throughout Europe.  A group of French scholars, including Caumont, Quicherat, Viollet-le-Duc, Felix de Verneuil and later Lasteyrie & Enlart established the true doctrine about the origin of the Gothic style and the enduring value of these admirable monuments of the French Middle Ages.

Today we know with no doubt, that the Gothic style wasn’t  an intellectual or mystical creation, but a technical revolution that occurred in the forms of the regional Romanesque schools of architecture and, above all, represents a direct product of the construction techniques originated in Burgundy and disseminated by the Cistercian monks.  However, the regions where the French Gothic reached its perfection were Normandy and the Ile de France, the royal domain territory surrounding Paris.  The Gothic architecture was formed at the time of the triumph of monarchy over feudalism.  It is no wonder, then, that the art of building -which is the most representative of a society and of a regime- developed around the capital in the very heart of the monarchy.  From there, the Gothic style quickly spread to all French regions, and in the mid-thirteenth century was fully in vogue in Germany and began to be introduced in Spain.  In France, the Gothic style reached its full development in the late twelfth century.

The essential feature of the Gothic style is a special type of groin vault framed within ogival-type arches*, hence the term Ogival style.  This type of ogival vault is supported by transverse and diagonal arches that lean against each other and their thrust is balanced by flying buttresses* or simple buttresses* on the outside.  This type of vault is called ribbed vault.  The groin vaults, like stone-shells supported by arches, were not a novelty exclusive of the Gothic style as they were already used during the Romanesque period and were also traditional of classical buildings.  But in the Romanesque style the groin vaults were not articulated but solid, and its thrust against the walls was muffled solely by the whole weight of the stone wall.  It is useful to insist on the difference between the groin vaults (classical and Romanesque) and the Gothic vaults with their free-ribbed vaults.  In order to cover a square or rectangular space, ancient Romans adopted the system of projecting diagonal arches from corner to corner and then filling the space between arches with concrete to obtain a concretioned vault.  In the Gothic style, transverse and diagonal arches appear loose, with its own elasticity, and the vault surfaces rest on them but without forming a single mass.  As a  consequence, in Gothic architecture, arches play the role of a permanent formwork, supporting all the weight and thrust in the support angles.  These support angles are the only areas of the building requiring very good foundations to hold up the full load of the vault.  In the inside, the vault arches’ lines meet at the pillars as if they were a bunch of branches on a trunk.  The ancient Roman groin vault was mainly designed for a square or rectangular space, while the Gothic vault can be used in all kind of spaces, even in triangular and trapezoidal spaces.

Once the thrust of a ribbed vault’s arches is concentrated on some specific parts of the wall, their oblique thrust, which tends to tear the wall down, is then counteracted by buttresses or arches projected against the wall and exerting a reverse thrust, thus opposing force against force.  In the Romanesque art the supporting force dynamics was different: first, the vault was usually cylindrical so it had a uniform thrust force along all the surface of the wall, this thrust was balanced with the weight of the wall itself which was reinforced in the outside by pilasters.  In a word, the mechanics of classical and Romanesque architecture is a static mechanics, that is, the system of opposing weight against thrust; while the Gothic mechanics is dynamic, i.e. the system of opposing thrust against thrust.  Therefore, a Gothic church itself is a very complicated and perfect system as you can’t change a part of the building without also altering all the others.  Theoretically, the day a buttress brake in a Gothic church, the thrust exerted by the arch resting against it would be opposed by absolutely no force and then the arch would brake-open, as also would do the other diagonal arches concurring to the same point and ultimately the whole construction, lacking a single item, would collapse. 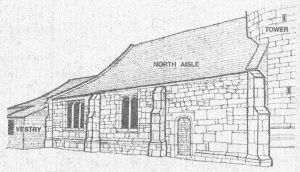 Buttress: An architectural structure built against or projecting from a wall which serves to support or reinforce the wall. 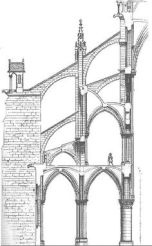 Flying buttress: A form of buttress composed of an arched structure that extends from the upper portion of a wall to a pier of great mass, in order to convey to the ground the lateral forces that push a wall outwards which arise from vaulted ceilings.  The defining, functional characteristic of a flying buttress is that it is not in contact with the wall it supports, like a traditional buttress, but consists of an inclined bar carried on a half arch that extends (“flies”) from the upper part of a wall to a pier some distance away and carries the thrust of a roof or vault. A pinnacle (vertical ornament of pyramidal or conical shape) often crowns the pier, adding weight and enhancing stability. The flying buttress evolved in the Gothic era from earlier simpler, hidden supports. The design increased the supporting power of the buttress and allowed for the creation of the high-ceiling churches typical of Gothic architecture.

Ogival arch: An arch with a pointed apex, the archetypal form of the Gothic period.

Ogival art: Another designation for Gothic art, the name is based in the ogive-form arches typical of Gothic art, Gothic style and/or Gothic architecture.