The ingenious combination of planes that gave more perspective to the reliefs of the Arch of Titus was also employed in the commemorative relief of the temple of Venus and Roma, but in a few years a big change in style took place.

In the triumphal column dedicated to Marcus Aurelius the reliefs representing this emperor’s campaigns had far less artistic force than the reliefs of the Trajan column, 50 years older.  It is undeniable that in the art of commemorative reliefs a sharp decline began.  In portraits instead, sculptors kept creating wonders throughout the second century AD like the portrait of Vespasian, full of naturalism, and that so well suggests the obese Etruscan complexion of the Flavians.  The emperors were usually represented wearing togas.  An excellent statue of the emperor Nerva sitting is housed at the Vatican and repeated the type of a portrait with the emperor sitting as an Olympian God.  With the exception of Augustus, there are more portraits of Trajan and Hadrian than any other emperor.  From Antoninus there are few portraits.  The only imperial equestrian statue that survived to these days is located in Rome: the equestrian statue of Marcus Aurelius (the only equestrian statue known by artists of the Renaissance and which Michelangelo moved to be placed in the Piazza del Campidoglio in Rome). Nowadays the original is on display in the Capitoline Museums, with the one standing in the Piazza del Campidoglio being a replica made in 1981 when the original was taken down for restoration.  This statue has served as a type for all modern equestrian statues.  If we remember from previous essays when discussing the Archaic Greek art, the equestrian statuary in the West goes back as far as the Archaic Greece period: we have discussed the sixth century BCE equestrian statue known as the “Rampin Rider” depicting a kouros mounted on horseback. 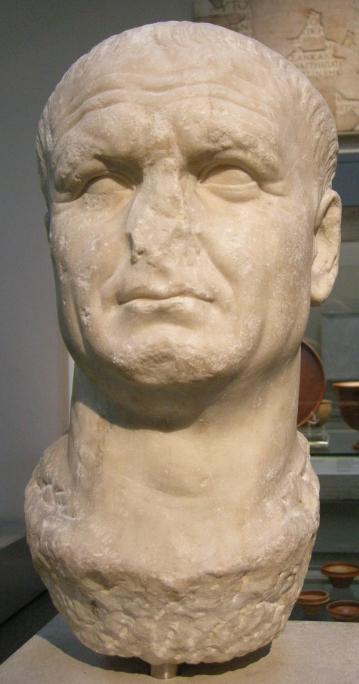 [Below, the Equestrian statue of Marcus Aurelius, ca. 175 AD., bronze, 4.24 m tall. Top: the original statue at the Capitoline Museums. Bottom: the 1981 replica in the Piazza del Campidoglio (Rome).] 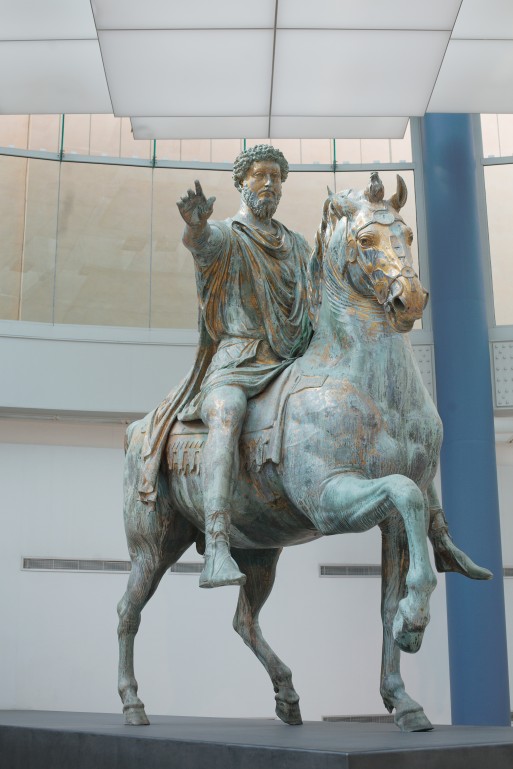 Antinous (ca. 111–130 AD), the young Bithynian Greek favorite of Hadrian, was almost considered a member of the imperial house.  After his premature death Antinous was deified following Hadrian’s orders, and in his memory the Emperor ordered to build a city in Egypt, Antinopolis.  In order to carve his idealized portrait, the imperial sculptors created a new artistic type, the last original product of classical art.  On a broad Apollonian chest was placed the sensual almost feminine head of Antinous with his Bacchic hair curls which represented a contrast between strength and refined sensuality, a true artistic creation for that time.  Antinous was represented in a thousand ways: naked or dressed in priestly robes, standing or sitting, like a god or transfigured as a hero with a poppy wreath and rose garlands, even as in the style of the ancient Egyptian pharaohs.

[Below, from top to bottom: The Antinous Farnese, (Naples National Archaeological Museum); Colossal statue of Antinous as Dionysos-Osiris (crowned with ivy, a head band, cistus, and pine cone), (Museo Pio Clementino, Rome); Statue of Antinous as a Pharaoh, probably once at Villa Adriana in Tivoli, ca. 135 AD. (Museum of Egyptian Art, Munich).] 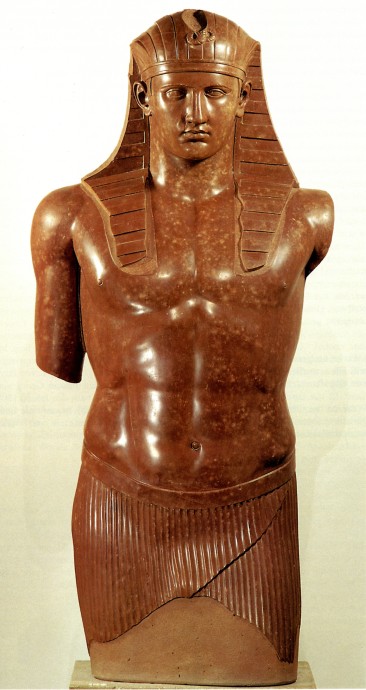 But even more interesting were the portraits of lesser magistrates and even those of ordinary citizens.  The Roman sculptors made wonders of characterization as some of these portraits were of tremendous resemblance to the model.  Sometimes, sculptors expressed feelings of intimacy that look modern to present day eyes.  In a funeral group at the Vatican, from the time of Hadrian, the wife with modesty and devotion rests her left hand on the shoulder of her husband, older than her, while with the other hand she holds his right hand, expressing the idea that the couple didn’t want to be separated even in the grave.

The hairstyle is a great tool to help date ancient Roman female portraits.  We have seen that in the time of the Caesars the hairstyle in fashion was that used by Livia, Augustus’ wife.  But during the time of Titus and the first years of Domitian’s rule was popular for women to have their hair forming a kind of headdress, while later during the last years of Domitian high arching crowns on the front and elaborate and extravagant hairstyles were very popular in the early second century.  The hairstyle involving elaborate hair curls is posterior to the Flavian period.

It is much more difficult to determine the date of male portraits because their hair style is not enough to define their chronology.  To date these portraits it is necessary to use different features: how the bust was cut (that is how much of the chest or body was included in the portrait), how the pupils were represented, having or not beard, and most of all the style in which the bust was sculpted.

At the time of the Flavian and Antonine emperors, Roman art not only excelled with these portraits of anonymous individuals, which were marvels of realism and personality, but curiously endeavored to reproduce the features of the various peoples of the Empire with their vast variety of characters and races.  This exercise was also done before by the Hellenistic artists, especially in Pergamon.  With its universal and imperial spirit, the Roman sculptors were much further. The realistic sense of the Roman sculptors took them to beautifully interpret not only the ethnos, i.e. the spirit of each race, which had been already achieved by the Greek sculptors, but they also interpreted unique details of each individual, such as the protruding ears of an old skinny man now housed at the Museum of Aquileia, or the portrait of an old man with his warty face that is kept in the Museum of Madrid.  Filled with life and realism, these portraits, now housed elsewhere in Museums of the cities that used to be Roman provinces in antiquity, appear to us with much more personality than those of the emperors which were always something academic.