The summer apartments of the Alhambra royal palace, the residence of the monarchs of Granada, have been preserved almost intact. It is assumed, without great fundament, that the winter palace was ordered to be demolished by Charles the Vth for the purpose of making instead a Renaissance building which remained unfinished.

The Alhambra was erected on the hill of the Assabica in the XIV century by sultans Yusuf I (1333-1353) and  Muhammed V, Sultan of Granada (1353-1391), called el-Ahmar (the “Red”), of the Nasser dynasty. The name of Alhambra literally means “the Red (female)”, because its predominant color, seen from afar, is that of the red bricks of the exterior construction and the red clay of the surroundings of which the fort itself is made.

In the same way that the Roman Empire imposed its customs and artistic sense even in the most remote provinces, so Islam imposed its mentality to the ends of the then-known Western world. The Islam introduced the Mesopotamian and Persian artistic styles and construction techniques to Andalusia. The Alhambra is a magnificent work of art but its beauty is enhanced by being located in such western lands. The Alhambra is essentially a totally oriental-style residence that seems to have been magically transported from Baghdad or Tehran.

The strangest thing is the very little Spanish artistic influence seen in the construction. In the mosque of Cordoba we find Roman columns and capitals, the classical basilica layout with multiple naves, and the shape of the horseshoe arch that was taken from the Visigoths. Nothing of these appears in the Alhambra: the classical, the Roman, the Visigoth and the Latin influences have been eclipsed to make room for something entirely exotic and Muslim.

If the winter part of the palace had been preserved, those more closed and more compact rooms would have revealed some influence of the Spanish Gothic style that can be found in the Alcazar of Seville. But as it is today the Alhambra, reduced to the patios and pavilions of the summer residence, it is a fantastic building abandoned by Islam in Western Europe as a witness to the tenacity and uniqueness of its artistic character.

The complex floor plan of the Alhambra allows to recognize its layout divided into the three fundamental units found in all the palaces of the Muslim princes: a) the mexuar*, open to all, in which the sultan* administered justice and received his subjects; b) the diwan* for the receptions, in which the throne room was located, and e) the harim* (or harem) with the private rooms of the prince.

The building techniques used for the Alhambra are still those typical of nomadic peoples: the supporting elements, which together with the beams or the light vaults form the skeleton of the building, are similar to the structure of a desert tent, and the panels are covered with carvings in plaster, whose decoration is overloaded with design and color. All the decorative elements of the Alhambra were polychrome; the stuccos with arabesques and the inscriptions on the walls still preserve traces of color and some of the gold painting.

The tiles, the marquetry and the plaster reliefs are the main elements of the Alhambra’s decoration, and in some areas, this same decorative elements allude to verses of the Koran.

The floor plan of the Alhambra is circumscribed inside a vast walled enclosure. Its external aspect, imposing as a fortress, is transformed in the most fascinating arrangement in the interior areas. Its most important rooms include the great enclosure (excluding the new buildings that disfigure it), the alcazaba or citadel, almost destroyed, and the proper palace. Outside of this enclosure and guarded by numerous towers are the sumptuous pavilions of the Generalife (or Jennat al-Arif  “Garden of Arif” or “Garden of the Architect”) that formed a separate building built in 1339 and still partially subsistent. Everyday life developed around two large patios: the Patio of the Pool also called the Courtyard of the Myrtles (Patio de la Alberca o de los Arrayanes) that corresponds to the center of the diwan, and the famous Courtyard of the Lions that corresponds to the center of the harim.

The walls of the Alhambra are covered with arabesques that hide the bare walls; the wooden ceilings disappear behind the hanging stalactites of painted plaster. The art of these multiple plaster elements, which has its apotheosis in the Alhambra, belongs to a peculiar Mediterranean art school; in India, in Syria and in Persia, the vaults are formed by alveoli or overlapping shells but without standing out from the vault’s curved surfaces, they are not arranged in stalactites hanging from the ceiling, as they are in Egypt, Morocco and Spain. The French general Beyle while exploring an abandoned city in the Regency of Tunisia where the fort of Al Qal’a of Beni Hammad stood, found these special plaster elements that characterize the Hispano-Moroccan Islamic art schools. The Beni Hammad fort was built in the early years of the tenth century and abandoned shortly after. It then indicates a certain date in which this particular type of decoration was first used.

On the walls of the Alhambra, in addition to the plaster panels with polychrome reliefs, there are glazed ceramic-covered areas with magnificent drawings in which the use of gold abounds. Water flows through the rooms’ floors, and the windows open onto the myrtle gardens, with shallow pools imitating those of the Oriental residences where water is scarce.

This Andalusian-Arab style has been preserved in Morocco, where there are still buildings of the same technique and style found in the Alhambra. But what gives special importance to this Royal Alcazar of Granada is that it has been preserved without the transformations that have modernized all the other Muslim royal residences, from those of Persia to those of Morocco. In its perfect state of preservation, the Alhambra is a more oriental palace than the current ones found in the East itself.

Alicatado: A mosaic formed of polygonal, colored glazed tiles. Made up into geometric patterns, they have been used mostly for paving Spanish and Moorish patios but also for wall surfaces. The expansion of the lands under Christian control in Spain in the 13th century led to a mixture of Gothic and Islamic styles (known as the Mudéjar style), in which alicatado was much used by Spanish craftsmen. These traditional patterns continue to be used, especially where Spanish or Arabic influences are strong.

Ataurique: The prevalent use in art or architecture of a repeating decorative motif consisting of a plant or floral pattern, especially as formerly practiced in Islamic Spain and North Africa.

Diwan: The guest house or reception areas of the tribal chieftain in the tribal Middle Eastern, Arab, Persian, or Kurdish society. 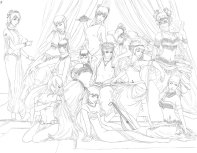 Harem: (from the Arabic meaning “a sacred inviolable place; female members of the family”). Refers to domestic spaces that are reserved for the women of the house in a Muslim family and are inaccessible to adult males except for close relations.

Mexuar: In a Muslim palace, the Mexuar houses the functional areas for conducting business and administration.

Stalactite Vaulting: Also known as Muqarnas, is a form of ornamented vaulting in Islamic architecture. It is the archetypal form of Islamic architecture, integral to the vernacular of Islamic buildings. The muqarnas structure originated from the squinch. Sometimes called “honeycomb vaulting or “Stalactite vaulting”. Muqarnas is significant in Islamic architecture, because its elaborate form is a symbolic representation of universal creation by God. Muqarnas architecture is featured in domes, half-dome entrances, iwans and apses. The two main types of muqarnas are the North African/Middle Eastern style, composed of a series of downward triangular projections, and the Iranian style, composed of connecting tiers of segments.

Sultan: (from the Arabic abstract noun meaning “strength”, “authority”, “rulership”).  The title of certain rulers who claimed almost full sovereignty in practical terms, albeit without claiming the overall caliphate, or to refer to a powerful governor of a province within the caliphate.

Tessellation: A tessellation of a flat surface is the tiling of a plane using one or more geometric shapes, called tiles, with no overlaps and no gaps. Historically, tessellations were used in Ancient Rome and in Islamic art such as in the decorative geometric tiling of the Alhambra palace. In the twentieth century, the work of M. C. Escher often made use of tessellations for artistic effect. Tessellations form a class of patterns in nature, for example in the arrays of hexagonal cells found in honeycombs. 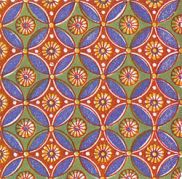 Wallpaper Group: A mathematical classification of a two-dimensional repetitive pattern, based on the symmetries in the pattern. There are 17 possible distinct groups.