The main purpose of the sculpture of the French Romanesque was to serve as a decorative element. There are very few direct references to sculptors of the time, like Gislebertus or Gillebert who probably trained in Cluny and who around 1135 carved most of the sculptures of the cathedral of St. Lazarus in Autun including its marvelous tympanum*.

Little is known about the origins of French sculpture, perhaps even less than that of ancient Greek sculpture. The first known group of French Romanesque sculpture dates back to the early twelfth century, though its origins are not clearly known. There was probably a traditional school of French sculpture during the ninth and tenth centuries, but there is no trace of this. In the Carolingian period, especially during the reigns of Charlemagne and Louis the Pious, there were artists able to sculpt wonders in ivory and to carve metals with as much or more artistry than that of the Roman or Byzantine sculptors. From these wonderful works of the Carolingian sculpture, some of its techniques must have survived until the dark and confusing times immediately preceding the year 1000. The truth is that all known buildings built before the millennium have little or no sculptured decoration. Their facades were only decorated with blind arches and pilasters. These elements divided walls in sections resulting in surfaces with purely geometric value and a rigorous but very simple aesthetic.

Figurative forms did not decorate Romanesque monuments until well into the eleventh century. The first dated artifact usually mentioned belonging to the French Romanesque sculpture is a lintel decorated with rough figures from the Cathedral of Saint Genis les Fonts in Roussillon, which bears an inscription from the year 1020. But this wasn’t a French site and this artifact appears to be a mere local art product. Instead, in the great royal monastery of Fleury in Saint-Benoît-sur-Loire, there is a tower built by Gauzelin in the year 1030 which bears ambitious historiated capitals* decorated with apocalyptic figures inspired by the Mozarabic Beatus. From this time on, the French sculpture progressed very fast until the end of XI century when great decorative works of sculpture appeared. These works included facade’s reliefs in an archaic style, but full of strength and dramatic intention, as well as capitals decorated with beautiful foliage, friezes located on the churches’ naves, and even some free standing statues. The French Romanesque schools of sculpture developed around three centers of great intellectual activity. One was the Royal Domain which began with the works of Gauzelin in Fleury; another school was formed at the court of Toulouse; and a third originated as a result of the great artistic works produced by the Order of Cluny. These schools mixed between each other too: there are important sculptures that cannot be assigned to any particular school, there are also monumental decorations so independent in style that make them look as if they were the work of foreign artists. Some sculptors signed their work on the abacus of a capital or in a separate plate that was later applied to the monument: we have said before how Gislebertus signed his facade at Autun, but all that’s known about these artists are their names. From the study of these commemorative inscriptions it appears that these artists were laymen, contrary to the Gothic painters and sculptors who were mostly theologians.

The most widely used theme to decorate a church’s facade was the view of the Almighty as the Pantocrator, the Son of God. He appears sitting on a throne inside the almond-shaped halo of the rainbow (or mandorla*) accompanied by the four symbolic animals or Tetramorphs as they were seen by the ancient prophets and described in the Book of Revelation. It is a scene that, when there was enough space available, included the 24 elder kings, each carrying the offertory cup and a violin or zither to sing praises to the Almighty.  This scene was sculpted in the tympanum of St-Pierre de Moissac from around 1130. Sometimes sculptors added two archangels raising their prayers plus the Apostles and the Virgin, because they also saw the Lord glorified in the act of ascending to Heaven. This complicated vision, appearance or Theophany* was often reduced to the halo with the Lord on his throne and the four symbolic animals: in this way He loses his prophetic and apocalyptic character to became a synthesis of the history of the King of Heaven, just simply as He manifested to the patriarchs and prophets and as He will appear to judge the living and the dead.

Besides representing Jesus as a deified Pantocrator, French Romanesque artists also portrayed him during episodes of his human earthly life. During the Romanesque, the almost exclusive image of the Son of Man paralleled the importance or near monopoly that images of Mary will later have for Gothic sculpture and painting. In the Gothic period, episodes of the Virgin’s life based on the apocryphal Gospels replaced in large part the representations of her Son Jesus. In the Romanesque period, on the contrary, the dominant topic was the Christology: the assumptions of the Old Testament were understood to illustrate parallel episodes of the life of Jesus.  The sacrifice of Abel alluded to the Golgotha, Abraham sacrificing Isaac, Samson dying while Dagon’s temple was crumbling, David as the pillar of the race from which the Messiah had to be born, all these episodes alluded to Jesus the King Redeemer.  From the Gospels, artists were only interested in episodes that directly included Jesus. Mary was His Mother, the Theotokos*, and so was always represented carrying the Child in Her arms.

Though Romanesque themes were identical in content, they were repeated with great stylistic variation. The French Romanesque sculpture reached a superb formal and technical perfection, as well as a great ability to compose complicated scenes within the peculiar spaces dictated by the design and disposition of the facades’ surfaces. French Romanesque sculpture was also peculiar for further advancing in the representation of the unreal. The great works of French Romanesque sculpture of the eleventh and the first half of the twelfth centuries (like the marvelous facades of Moissac, Vezelay and Autun), are full of expressionism, even more that’s shown in the works of many modern artists. The fact of overstepping the figures’ proportions by dislocating their members to prove with impossible gestures their heavenly and semi-divine character doesn’t imply that the figures of these Romanesque facades are a morbid or a degenerate form of art. At best they can be described as “baroque” Romanesque because they pushed the boundaries of moderation in their decorative style, a situation that leads to “baroquism” in all artistic styles. Vezelay is considered today one of the most sublime artistic Western monuments because of the extraordinary tympanum of its facade (from ca. 1120) in which a tall Pantocrator ascends to heaven between the Apostles. In Saint Lazarus of Autun, the tympanum describes an impressive Final Judgment with horrible demons and angels with endless bodies.

It is believed that some Romanesque sculptors from Central France could have been involved in the decoration of the oldest parts of the first Gothic cathedrals. It is surprising to find in the Cathedral of Chartres rigid caryatids, incredibly tall, with their mantles’ folds falling vertical like column’s grooves while their faces show huge vitality. Other similar statues from the porch of the royal abbey of Saint-Denis have even more exaggerated proportions. Between them, there are figures of tall young queens with braids reaching their feet parallel to their dresses’ folds, they look so artificial that seem more columns than statues. In the region of Reims prevailed an aristocratic and refined style, which seems derived from the Carolingian art that evolved earlier in that collegiate cathedral.

Other French Romanesque sculptors were characterized by a great naturalism, especially those of the Toulouse School.  The initial literary humanism manifested in Toulouse by the troubadour poetry produced similar effects in the visual arts. Proof of this are the beautiful capitals of the cloister of San Pedro de Moissac, from late eleventh century, and the gentle relieves from the Gate Miégeville at the Basilica of Saint Sernin, also in Toulouse.

In many of these relief decorations, the purely decorative ornamentation representing grape vines, acanthus leaves, and fretwork was sometimes accentuated by the use of trepan over intense black backgrounds.

The Oriental influence was continuous during the Romanesque period, not only coming from Syria and Byzantium, but also from the Far East. There are some reliefs that decorate the nave of the cathedral of Bayeux that seem to be inspired by the art of India.

*Historiated Capital: A capital which is decorated with figures of animals, birds, or humans, used either alone or combined with foliage. Sometimes these figures don’t have any meaning, although they may be symbolic or part of a narrative sequence.

*Mandorla: Also an aureole, the radiance of luminous cloud which, in portrayals of sacred personages, surrounds the whole figure.

*Theophany: From Ancient Greek  meaning “appearance of a god”. Refers to the appearance of a deity to a human or other being. The term theophany also has acquired a specific usage for Christians and Jews with respect to the Bible: It refers to the manifestation of God to man; the sensible sign by which the presence of God is revealed.

*Theotokos: Refers to the Greek title of Mary, the mother of Jesus used especially in the Eastern Orthodox, Oriental Orthodox, and Eastern Catholic Churches. Its literal English translations include “God-bearer”, “Birth-Giver of God” and “the one who gives birth to God.” 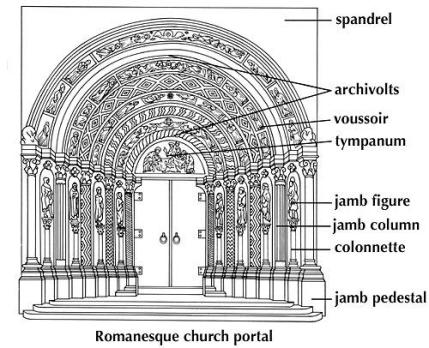 *Tympanum: A semi-circular or triangular decorative wall surface over an entrance, bounded by a lintel and arch. It often contains sculpture or other imagery or ornaments. In Christian architecture a tympanum usually contains religious imagery, and thus are usually the most important location for monumental sculpture on the outside of the temple. In classical architecture, and in classicising styles from the Renaissance onwards, tympana were usually triangular; in Romanesque architecture they were in a semi-circular shape, and in Gothic architecture they had a more vertical shape coming to a point at the top.