Southern Italy and Sicily were occupied by Norman peoples (from the coast of northern France) starting in 1060. This Norman occupation took good advantage of Arab and Byzantine artists who remained in Italy following the Islamic conquest of Sicily in 965. As a result, the construction of Norman monuments in Southern Italy were directed by French architects (pure Norman), implemented by Muslim workers, and decorated by Byzantine artists and sculptors, all working in perfect harmony. The result is that, while in their exteriors Norman monuments in Sicily have a French look, inside they were covered with mosaics genuinely looking Byzantine, and when examining them in detail it can be noticed the Muslim style mainly in the lacking of several domes per building (a typical feature of Byzantine art).

The Sicilian Norman churches had a basilical floor plan with three naves covered with wooden frameworks sumptuously decorated. Only in the transept and apses they used spherical vaults lined with mosaics representing Byzantine themes and legends. The lateral walls were internally covered to a certain height with a marble inlaid of Arab drawings, the ceilings were decorated with mosaics representing figurative scenes. The columns of these buildings were ripped from ancient Roman buildings, including their capitals, to be reused in these Christian churches. The first Sicilian Norman church was built before the taking of Palermo, on the outskirts of the capital, and is known as St. John of the Hermits. Inside Palermo itself, the oldest church is St. Mary of the Admiral also known as “Martorana”. Typical from this church are the arches separating the naves called pointed arches* typical of Norman buildings, although the decor is quite Byzantine. Next to this chapel of the Admiral was a bell tower built according to the methods of Gothic art which was by then evolving in northern France and later imported to Sicily by Normans.

There is also the small chapel of the Royal Palace in Palermo preserved with slight restorations. It is considered as the most precious jewel of Sicilian art. It has three naves supported by ancient columns, and its ceiling carved by Arab artists was built in wood with polychrome caissons* including scenes of strict Islamic style depicting the life in the desert, the harem, and allegories not known by Christian art. In the Palatine Chapel the light penetrates almost only through the windows of the small golden dome covering the transept. The floor is covered by beautifully inlaid hard stones, and the church still has its old pulpit* and chancel*, its royal throne with mosaics, and the wonderful paschal chandelier influenced by classical styles.

In addition to these small churches, the Sicilian kings of the Norman dynasty built great cathedrals using the same style we just discussed. The first of these was the Cathedral of Cefalu, a small town on the western coast of Sicily. Its facade shows the French style with two almost Gothic towers flanking the front of the church and a portico at the entrance. Inside has the most beautiful mosaics in Sicily, especially those of the apse. Another cathedral worthy of mention is the Cathedral of Messina.

The beautiful Church of Monreale, near Palermo and that served as a burial place to the Norman princes, is divided into three naves by tall marble columns. The roof, for being so high, has a simple wooden framework. In its walls is where you can really admire the wealth and magnificence of this building, the same applies to the floor decorated with beautiful drawings made with colored marbles, and of course, the decorative Byzantine mosaics. Monreale was founded in 1176 by William the Good. Next to the church of Monreale is a cloister filled with palms and semitropical plants. In one corner it has an oriental style fountain inside a pavilion with columns whose shafts are covered with red and golden mosaics. In Monreale is also typical to see the royal tombs and the mosaic covered floors masterfully carved with large blocks of hard stones such as porphyry.

This semi-Arabian and semi-Byzantine style spread from Sicily to southern Italy, where the Norman court resided for short periods of time during the year. Thus both in Sicily and Venice and then throughout Italy, art was saturated during the tenth and eleventh centuries with Oriental, mainly byzantine styles. This expansion of Byzantine art throughout Italy coincided with the various expeditions that German emperors made to Italy in order to claim their rights as successors of Charlemagne to the ancient Roman Empire. As a consequence during their expeditions, Germans also carried these Byzantine artistic and cultural influences to their native land.

*Caisson: (Meaning “boxes”). The series of sunken panels used as decoration for a ceiling or a vault, also called lacunaria (“spaces, openings”), typical of the coffered ceilings or vaults.

*Chancel: In church architecture, the chancel is the space around the altar, including the choir and the sanctuary (sometimes called the presbytery), at the liturgical east end of a traditional Christian church building. It may terminate in an apse. It is generally the area used by the clergy and choir during worship, while the congregation is in the nave. In churches where the eastern end contains other elements such as an ambulatory and side chapels, these are also often counted as part of the chancel. 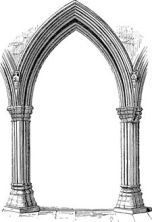 * Pointed Arch: Typical of medieval churches constructed in the Gothic style, probably influenced by similar arches that were in used in Middle Eastern architecture centuries before. The Pointed Arch is characterized by a pointed rather than circular apex. Its structure allows to direct weight onto the columns at a sharp angle, thus allowing for much taller vaulted ceilings emphasizing height and verticality.

*Pulpit: (From Latin pulpitum, “platform or staging”). A raised stand for preachers in a Christian church. The traditional pulpit is raised well above the surrounding floor for audibility and visibility, accessed by steps, with sides coming to about waist height. From the late medieval period onwards, pulpits have often had a canopy known as the sounding board or abat-voix, normally in wood.

One thought on “Expansion of Byzantine Art through Sicily and Southern Italy: Norman-Arab-Byzantine Art”