Several decisive changes occurred in other regions of ancient Mexico from the middle pre-Classic period (1300-800 BC) which marked the emergence of a much more advanced culture in the Olmec region located in the Gulf of Mexico in today’s southern Veracruz and northern Tabasco. The Olmecs were the first major civilization in Guatemala and Mexico and are considered the first Mesoamerican civilization that laid many of the foundations for the coming great pre-Columbian civilizations. The Olmec civilization flourished during Mesoamerica’s pre-Classic (or Formative) period, from ca. 1500-400 BC.  With the Olmecs for the first time in pre-Columbian America arose the great sculpture in stone as well as the carving of fine stones such as jade or serpentine. It should not be forgotten, however, that these artists only used stone chisels and other simple utensils to carve and polish stone, not to mention the enormous difficulties they had to overcome in order to extract heavy and bulky stone blocks from very distant quarries and then transport them to the indicated places using wooden platforms, ropes and rollers. The results achieved by the Olmecs certainly do not reflect those difficulties and the colossal heads made in places like San Lorenzo, La Venta and Tres Zapotes show a truly surprising aesthetic maturity. These colossal heads are the signature of the Olmec artwork.

Next to the colossal heads that represent an aspect of the Olmec art, altars, stele and other works of different dimensions were also sculpted in which a more prevalent aspect of the Olmec art is noticed: the rather Asian facial features in sculptures and other artworks combined to a greater or lesser degree with feline characteristics (known as the “were-jaguar*” Olmec motif). In fact, many Olmec sculptures reflect the cult of a mythical being, the “were-jaguar” and this cult was reflected in all the imaginable ranges of “humanization” of the jaguar or “felinization” of man.

From the “shamanism” of the primitive agricultural villages emerged a mythical conception that preceded the establishment of a religious cult. In addition, for the first time in Mesoamerica, the Olmec civilization was dedicated to large-scale building by producing gigantic platforms and raised basements made of compacted earth culminating in the first planned “ceremonial centers” of pre-Hispanic Mexico. The regular layout of these constructions, as well as their orientation following a main axis oriented according to the cardinal points, allow to suppose that there was a preoccupation for astronomical observations and even perhaps for time measurement, concerns that will later crystallize in the astronomical calculations and ingenious dating system used by cultures like the Maya. The cultural advances achieved by the Olmecs spread throughout ancient Mexico during the first millennium BC. It was precisely from this rich Olmec cultural heritage that the great theocracies of the Classical period (200-1000 AD) arose in almost the entire area known today as Mesoamerica and which encompasses not only much of present-day Mexico but also Honduras and El Salvador.

Except for the west of Mexico, which we discussed in a previous essay, the first millennium BC represented an important transitional phase in the history of the Mesoamerican civilizations in which under the Olmec influences, the true “mother culture”, the foundations of later cultures were laid, each one with its own personality and historical trajectory.

One of the most important cultural centers of this period is the region of Oaxaca, where for the first time in Mesoamerica appeared some representations of clearly identifiable deities whose artistic evolution lasted for about two millennia through the artworks of Monte Albán. It was also in Oaxaca where the first still primitive system of “glyphic” writing seems to be developed in the New World. Meanwhile, other important cultural centers such as Izapa and Kaminaljuyú emerged south of the Maya area whose art constitutes a transition between the Olmec and Mayan art. Meanwhile in the valley of Mexico, the great stepped pyramid of Cuicuilco announced with its monumentality the future constructions of Teotihuacan.

Thus, during these last centuries before our era, a deep metamorphosis shook the structure of many primitive villages. And it was precisely during this decisive phase that numerous cultural factors common to all of Mesoamerica were established: the preponderance of the “ceremonial centers” with their buildings arranged according to some particular orientation; their squares integrated by platforms, staircases and stepped pyramids; the ritual Mesoamerican ballgame* and its associated funerary architecture; the social hierarchy around a markedly theocratic structure and the consequent creation of a complex pantheon of gods together with their elaborate religious ceremonies; the simultaneous use of two calendars: the solar calendar of 365 days and the ritual calendar of 260 days; the development of a vigesimal or base 20 numeral system and a “glyphic” writing system, etc. All these common features were the foundation of the great classical cultures such as Teotihuacan, Zapotec, Totonac and Mayan, who reached their cultural peak within the first millennium of our era.

Feathered Serpent: The Feathered Serpent was a prominent supernatural entity or deity, found in many Mesoamerican religions. It was called Quetzalcoatl among the Aztecs, Kukulkan among the Yucatec Maya, and Q’uq’umatz and Tohil among the K’iche’ Maya. The double symbolism used in its name is considered allegoric to the dual nature of the deity, where being feathered represents its divine nature or ability to fly to reach the skies and being a serpent represents its human nature or ability to creep on the ground among other animals of the Earth, a dualism very common in Mesoamerican deities. The earliest representations of feathered serpents appear in the Olmec culture (ca. 1400-400 BC).

Mesoamerican Ballgame: The Mesoamerican ballgame was a sport with ritual associations played since 1400 BC by the pre-Columbian peoples of Ancient Mesoamerica. The sport had different versions in different places during the millennia, and a newer more modern version of the game, ulama, is still played in a few places by the indigenous population. In the most common theory of the game, the players struck the ball with their hips, although some versions allowed the use of forearms, rackets, bats, or hand-stones. The ball was made of solid rubber and weighed as much as 4 kg (9 lbs), and sizes differed greatly over time or according to the version played. The game had important ritual aspects, and major formal ballgames were held as ritual events. Pre-Columbian ball-courts have been found throughout Mesoamerica, as far south as modern Nicaragua, and possibly as far north as what is now the U.S. state of Arizona. These ball courts vary considerably in size, but all have long narrow alleys with slanted side-walls against which the balls could bounce. 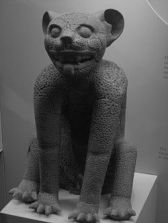 9 thoughts on “Pre-Columbian Art of Mexico, The Olmec Art and Its Diffusion”